The King of Belgium, Tom Boonen (Omega Pharma-Quick Step) reigned supreme in this inaugural two-day race. He powered to victory on the first stage after omnipresent coastal winds had split the peloton and exhausted most of the competition who’d had to chase back to the leading group. None of the commentators had fancied Boonen for the win, so he was spared their ‘kiss of death’. To be fair though, even he had downplayed his chances in the pre-race press conference. Tom was sandbagging: he was just gagging for another win. His last had been his national road race championship. Wearing the red, gold and black kit does make him easier to spot among his teammates but Tom always stands out in a crowd whatever he wears.

Allegedly not interested in the overall, Tom showed his hand – and his appetite for victory – on today’s second stage when he went for the bonus seconds on offer at the first intermediate sprint. He then finished third behind Andre Greipel (Lotto-Belisol), his nearest challenger, to retain the overall royal blue and the points jersey. Alexander Kristoff (Katusha) was the best placed young rider while Topsport Vlaanderen-Mercator were top team. 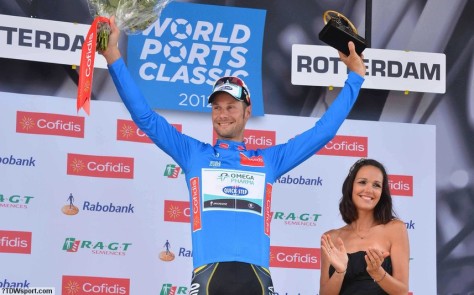 Here’s what Boonen had to say after the stage:

I’m happy about this victory and these two days of races. I knew that to get a good result it was important to finish in the top three two times, and that’s what happened — we made it. The team was great in those two days. It was a special race with a lot of wind. We built the GC victory yesterday and today we protected and kept the jersey.

I have to say that it wasn’t so easy, especially yesterday. If you look at the result, it seems like we had two bunch sprints, but it’s not exactly what’s happened. If you talk with some guys in the peloton, they can tell you that yesterday it was the hardest race of their life because of the wind and the high speed. Now this is done and I’m happy about the result. It’s a good race in this moment of the season. Riders who didn’t race the Vuelta were all here, so the level was high.

Boonen beat off  Greipel and Kristoff in the bunch sprint for the line in what he later called a four-hour time trial. Boonen and his teammates had ridden hard from the start which, combined with the strong cross-winds, had reduced the leading group to around 40 riders.

Aided by the autumnal, windy conditions, the peloton split into three pretty much from the get-go in the first running of this ASO-organised event. Boonen, Mark Renshaw (Rabobank), Marcel Kittel (Argos-Shimano) and Oscar Freire along with team-mate Kristoff were in the leading group. Meanwhile Greipel and Theo Bos (Rabobank) were in the second group some 30-40 seconds back for most of the stage, thanks to the strong crosswinds, although they did manage to bridge before the finish, but chasing had taken the sting from their legs.

OPQS rider Andrew Fenn had been in a two-rider break until 2.7km remained, attacking out of the front group with 32km to go. He and Michael Morkov (Saxo Bank-Tinkoff Bank) had about a 30-second gap over the Boonen chase group. Eventually, a second chase group that included Greipel caught the Boonen group, setting up an exciting final sprint into Antwerp. Boonen was able to demonstrate his strength in front of a jubilant home crowd to take the win ahead of Greipel.

Today’s stage was much more of a pure sprinter’s stage and this time it was Bos’ turn to delight the home crowd with a powerful surge for the line in the anticipated bunch sprint. Yesterday’s stage was covered at an elevated pace and so too was the first 50km of this sunny stage in the reverse direction, albeit over a different and shorter parcours. The leading teams whose sprinters were in with a chance of the overall kept the pace high for the first intermediate sprint 15km into the race, where Greipel beat Boonen in a photo finish thereby gaining a precious second over him.

The break was finally established after 45km and it included Lieuwe Westra (Vacansoleil-DCM), Jaroslaw Marycz (Saxo Bank-Tinkoff Bank) and Kevin Claeys (Landbouwkrediet-Euphony), all of whom were well down on the overall, posed no GC threat and gained valuable exposure for their team sponsors. Their lead never extended beyond four minutes as the sprint teams were keen not to extend them too great an advantage and they were caught within 15km of the finish.

All the teams worked hard to get their men into position through a series of roundabouts and turns on the run into the finish. Today it was Rabobank’s turn to shine and, profiting from home advantage and their knowledge of the route, they perfectly positioned Bos, who beat Greipel, Boonen and Kristoff to the line to record his sixth win of the season.

The sprinters who are more likely to be working for compatriots more adept at getting over the Cauberg at the forthcoming World Championships are coming nicely into form. Take a few minutes to check out a few names in the lower half of the top ten – you’ll be hearing more about these youngsters in the coming seasons. VeloVoices has already had its collective eyes on Steele Von Hoff –  Jonathan Vaughters knows how to pick ’em. Guillaume Boivin shared a bronze medal with Taylor Phinney in the under-23 World Championship road race in Melbourne in 2010.