With the Tour de France now a fading memory, the Olympic programme complete and the Vuelta a Espana fast approaching on the horizon, the VeloVoices team is again reviewing the performances of our selected riders to watch in 2012. I’m following the progress of three Classics specialists in 2012: BMC’s Philippe Gilbert, the top-ranked rider in the world last year, Omega Pharma-Quick Step’s former world champion and Tour de France green jersey winner Tom Boonen, and Garmin-Sharp’s Koldo Fernandez. Here’s a quick summary of what they’ve achieved (or haven’t) in the past couple of months.

Philippe Gilbert has continued his underwhelming season, despite the Tour de France and Olympic road race having sections to his liking. Compounding the disappointment is the fact he is no longer Belgian national champion, with Tom Boonen retaking the crown.

With the Tour de France starting in Belgium the first stage was tailor-made for a Gilbert win to delight the home crowds. But, as has been the case throughout the season, Gilbert didn’t have the firepower to accelerate away from the bunch, and he disappeared almost completely from view for the remainder of the race.

That was until stage 18, when he was taken out by a dog, the size of which was amusingly compared to a pony by other riders, with Gilbert himself saying it was “heavier than Scarponi”. Less amusing was the thought that he might miss out on the Olympics, and he made his thoughts known to its terrified owners in no uncertain terms.

Fortunately, Philippe recovered in time to make the Olympics, but despite it being a course which suited him (or at least would have last season) and getting into the large breakaway from which the eventual winner was drawn, he finished 18th, and 17th in the following time trial. 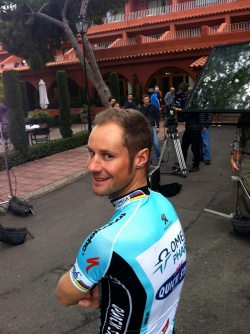 Boonen has had a reasonably quiet spell since our last update, the highlight of which being his second national title, in which he sprinted out of a five-man breakaway to take the tricolore.

Elsewhere he abandoned the Tour of Poland after a crash on the opening stage caused a broken rib, although this fortunately didn’t endanger his participation in the Olympic road race, which he had built the middle part of his season around.

Opting to skip the Tour de France, it was disappointment in London, as he finished in 28th place. Contesting the peloton’s sprint for the line, Boonen finished directly behind Andre Greipel, and just in front of Mark Cavendish.

As I write this Tom leads the Eneco Tour, having constantly lurked near the front at all of the bunch sprints so far. Even though he should be able to survive the final hilly stage, his time trialling probably isn’t enough for him to hold on to that lead until the end, with stage wins his main focus.

After a quiet start to the season, Koldo Fernandez has recently begun to show his sprint credentials, finishing second in the Spanish national championship road race before two top tens in the Tour de Wallonie.

At the moment Koldo is riding the Tour de l’Ain as Garmin-Sharp team leader, with a sixth place on the opening stage. He seems to be gradually riding himself into shape, and hopefully it won’t be long before he takes his first win since September 2010 and his days riding for the Basque outfit Euskaltel-Euskadi.