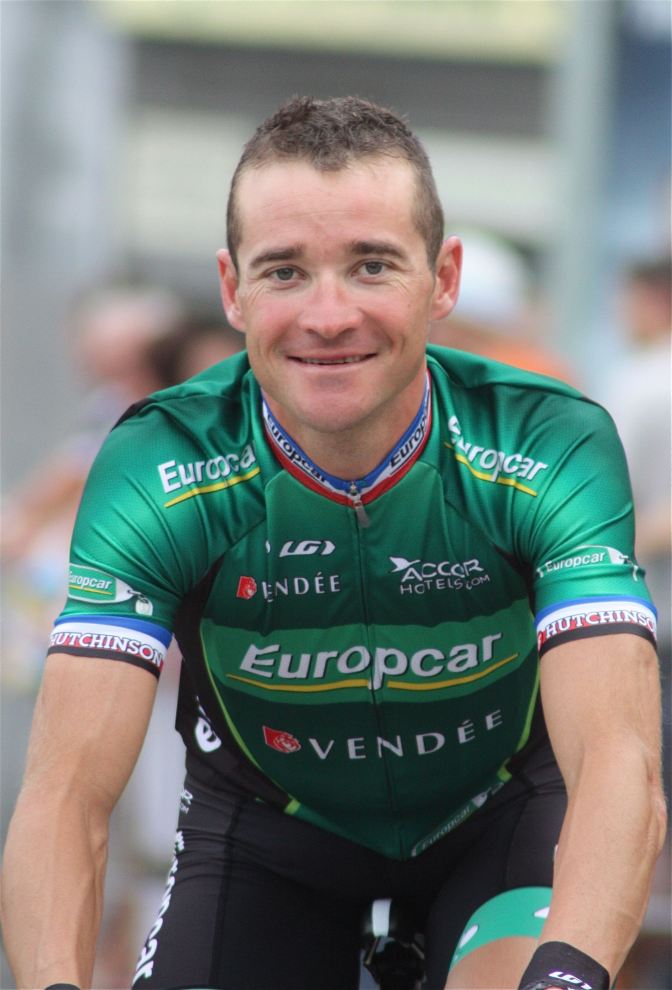 Today was a tale of two tussles. The first was a battle of old-style pugilism as Europcar’s talisman and France’s chou chou, Thomas Voeckler, soloed to his second stage victory in Bagneres-de-Luchon – setting of his 2010 stage win – to take the Tour’s queen stage. The former French champion escaped from compatriot Brice Feillu (Saur-Sojasun), in the final 5km of the Col du Peyresourde, and managed to resist the late attempt of Chris Anker Sorensen (Saxo Bank-Tinkoff Bank), who finished runner-up 1:40 down. Gorka Izagirre (Euskaltel-Euskadi) – older brother of Giro stage winner Jon – beat Alexandre Vinokourov (Astana) in the sprint for third after the Kazakh slipped from his left pedal on the run-in to the line.

Voeckler, Feillu, Sorensen, Izagirre and Vinokourov had been part of a 38-man breakaway which, having escaped in the opening 20km of the stage, led over the Col d’Aubisque before being distanced by the French duo on the iconic Col du Tourmalet. Voeckler took maximum points on all of the climbs to overtake Fredrik Kessiakoff (Astana) and secure the polka dot jersey – the cherries on the white icing – by four points. Voeckler was also adjudged the day’s most combative rider.

Our second fight involved the GC heavyweights, if you can refer to guys weighing under 75kg as such. Would anyone be put to the sword on the ‘Circle of Death’?  [What is this, WWF? – Ed.] Vincenzo Nibali (Liquigas-Cannondale) tried, attacking not once, not twice, but three times. The only riders able to stay with these attacks were race leader Bradley Wiggins and his wing man Chris Froome (Sky). However, Nibali did achieve his objective of putting further distance into his rivals. Specifically, defending champion Cadel Evans (BMC) lost almost five minutes on the yellow jersey group on the Cols d’Aspin and Peyresourde.

Vincenzo Nibali said he would try to consolidate or improve on his overall third position. He’s a man of his word and one would expect nothing less from a Sicilian, particularly one nicknamed the ‘Shark of Messina’. Whenever an opportunity has arisen – and let’s be honest there haven’t been many of those – he’s sought to exploit it. Sandwiched between two better time-triallers, he needed to put blue sky between himself and his nearest rivals. He’s done that today and may well try again tomorrow. Sky have the measure of him though, so he’s probably going to have to settle for third.

Here’s what he had to say before the stage start:

My ambitions today are exactly the same as they were at the start. However I am realistic and even though I’ll try I need a monumental feat to win the yellow jersey. I’ll be looking at who’s in front of me and behind me over the next couple of days. My advantage over Evans isn’t that reassuring, and I think it will come down to how much is left in the tank rather than ability in the time trial. I’m calm, I feel good and I’m motivated to do well: all the conditions are right to wrap up this Tour with a great result.

And this is his team’s response to today’s efforts:

Pretty much as we thought, the only jersey to change hands today was the King of the Mountains. For a man who three weeks ago was contemplating missing this year’s Tour with a knee injury, Thomas Voeckler (Europcar) has had a Lazarus-like resurrection and set his sights firmly on a place on the podium in Paris, sporting the red polka dot jersey. It’ll be interesting to see how spotty he goes tomorrow and whether he can sustain the challenge where mega-mountain points are also on offer with five more climbs and a mountain-top finish. His closest challengers will be equally tired from today’s exertions but equally determined. They are the recently unseated Fredrik Kessiakoff (103 points) and third-placed Chris Anker Sorensen (77).

None of the other jerseys were under threat and remain on the shoulders of Peter Sagan (points), Tejay Van Garderen (young rider) and overall leader Bradley Wiggins (race leader).

There may be a flurry of further attacks tomorrow and a big breakaway by teams desperate to salvage something from this Tour, but I’m not expecting any big changes. The stage will merely resolve the remaining jerseys, nothing more.