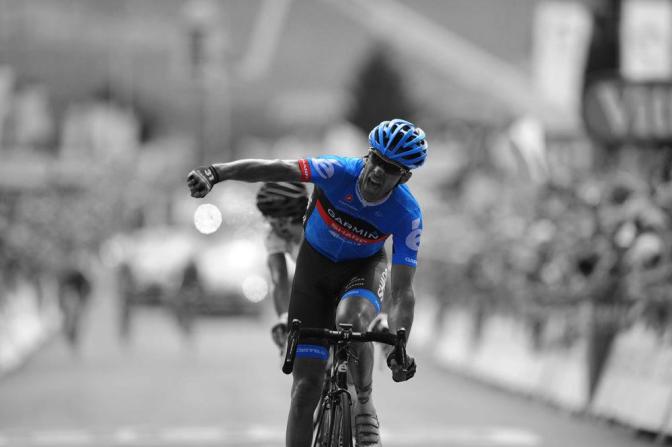 David Millar used his considerable Tour savvy to win from a breakaway and provided a much-needed fillip to Garmin-Sharp’s fortunes. Millar outwitted Jean-Christophe Peraud (AG2R La Mondiale) in a tense game of cat and mouse on the run in to the finish after the pair had distanced their three breakaway companions in the final kilometres.

Today’s stage had successful breakaway written all over it and it was no surprise that a group of 19 eventually broke free before the first climb of the day. A number of riders subsequently tried to unsuccessfully bridge across – at one time even the maillot jaune jumped out to herd an errant flock back into the peloton. Over the first two climbs, both Cat 1s, the breakaway was whittled down to 11 and then finally five: Robert Kiserlovski (Astana), fresh-faced Cyril Gautier (Europcar) and Egoi Martinez (Euskaltel-Euskadi) in addition to the aforementioned Millar and Peraud.

Matt Goss (Orica-GreenEDGE) led home the peloton, with Peter Sagan (Liquigas-Cannondale) on his wheel, to add to their respective points tallies in the hunt for the green jersey. Goss wavered from his line causing Sagan to check and the former was subsequently relegated by the race jury. Bradley Wiggins finished safely in the bunch as the peloton enjoyed a relatively easy day. No bad thing after the efforts of the previous two days and with the Pyrenees looming on the horizon.

This was Millar’s fourth stage win in the Tour, and only his second road win, the others being in prologues. It was also the fourth win by a Britain in this year’s Tour and now four of the five Olympics GB team members are Tour stage winners. It was also the 45th anniversary of the death of Tommy Simpson  – the first British rider to wear the maillot jaune – on Mont Ventoux.

It has to be today’s stage winner, David Millar, who collapsed after crossing the line exhausted from his heroic efforts remaining in the day’s long break and then chasing down numerous attacks from his fellow breakaway riders to take an emotional, hard-fought and intelligently raced victory.

His teammates certainly seemed to appreciate the win:

I have no idea why this was one of the stages which was televised from start to finish. During what could be politely called a lull in proceedings, television commentators everywhere were forced onto the back foot. There’s only so much time you can spend discussing France’s rich heritage, culture and gastronomy. We were treated to the full gamut from I-spy, trainspotting, reminiscing about one’s early career, amusing anecdotes and bad jokes. Out on the road we had giant pears, tricolour cows, French workers emulating The Full Monty from the roof of their warehouse, small hovercraft racing along the river Rhone and spectators in fancy dress. Even over on Twitter, we had to work hard to keep ourselves amused.

With little or no action of note on the road, everyone fell back on yesterday’s WAG story in which the respective other halves of Messrs Wiggins, Cavendish and Froome indulged in a cat fight. I think they’ve yet to kiss and make up a la Vincenzo Nibali and Wiggins.

Today was one of those famous transition stages where the successful breakaway provided a welcome reversal of luck for one of the teams staring down the barrel of a potentially empty-handed Tour. It had absolutely no impact on either the jerseys or the general classification. Instead it provided all, bar the five in the breakaway, with a recovery day ride.

Tomorrow’s stage heads down to the coast on a stage for the sprinters but the overall contenders need to be aware that the likelihood of coastal winds, in particular the Mistral, could wreak further havoc and more broken dreams.