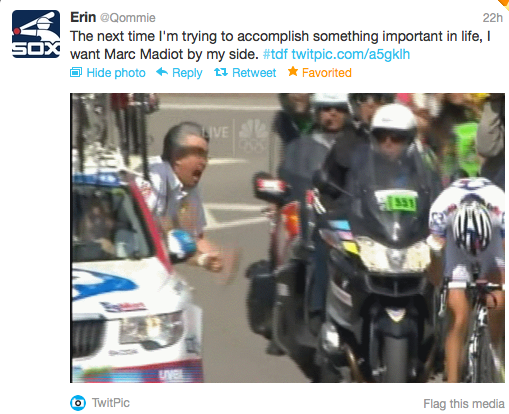 Funny, cruel, odd, personal … you get it all on Twitter. Each week, we’ll have a rundown of some of our favourite tweets. Here are the tweets for the week ending 8th July 2012.

Another embarrassment of riches this week in the Tweets department …

Let’s start with one of the most heartwarming scenes ever in cycling: Marc Madiot going absolutely bonkers when his lad Thibaut Pinot neared the finish line to win stage eight in a brilliant ride. And didn’t we all love that performance from Madiot?!? 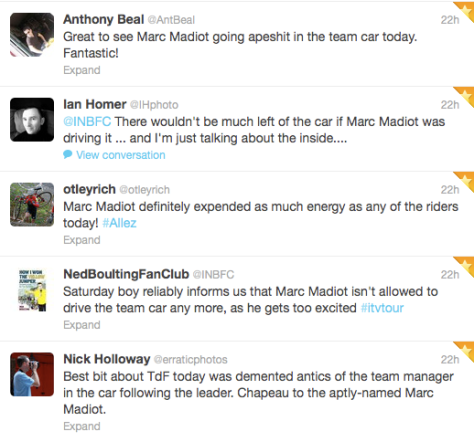 We’ve had a few, um, interesting responses from riders in/about the press this week. Stage seven saw Fabian Cancellara losing the maillot jaune to Bradley Wiggins, but not without a fight. Spartacus hauled his mighty haunches up that steep gradient, past his own team’s climbers: Frank Schleck, Chris Horner and  Andreas Kloden, desperately trying to keep the yellow for just one more day. The RSNT press release mentioned that perhaps Kloedi didn’t have the legs. This led to a few interesting tweets …

Let’s face it, behaviour like this only brings out the wit in the Twitterati. (And is it just me or does he contradict himself?) The next day, again, Kloedi was not really in the mix much …

Yep, all strangely quiet on the Kloden front.

Show us your wounds

This is in no way to make light of the many crashes that have led to hospitalisations and abandonments in the Tour, so please take these as they are intended – and most of them are posted by the riders themselves. They seem to like to post up their scars – we’ve had a few in earlier posts, in fact, I think we had a self-portrait of Koen de Kort in full mummy bandages earlier in the year. Anyway, first up is Mark Renshaw‘s buttock blows, which seems to have brought on flashbacks for UCI_Overlord! (Did I mention that I love UCI_Overlord? I do.)

Ladies’ favourite Bernie Eisel is really getting into the swing of Twitter – he’s a newbie, you know – and here he gets a little DIY stitching on the Sky bus after the crash in stage … was it five? In fact, Scott Mitchell, the official photographer, took a lot of pictures of our boy Bernie getting tended to. Here he’s saying: “Ladies, don’t worry, I’m okay! I’ll ride again! And I’ll have an elegant little scar to make me just that much more attractive to you!” As if he could be!

Philippe Gilbert, who seems to be having a mediocre Tour at best, doesn’t seem to overly concerned by this little scrape. That said, there goes his leg modelling career! 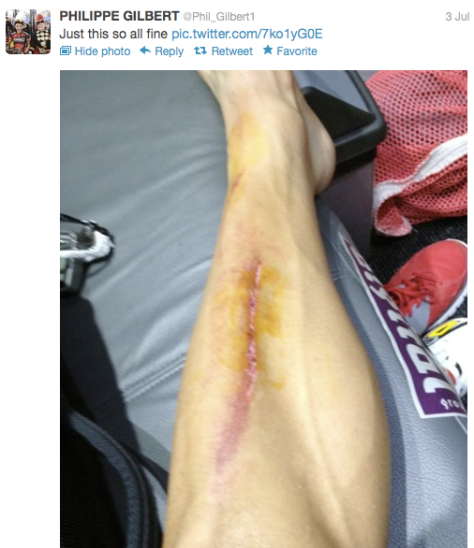 David Millar is looking on the bright side of his run in with Wolverine as well. Seriously, how do you get injuries like that?

On the subject of crashes, Cancellara had a little something to say. Coming from a man who just recovered from a quadruple fracture from a crash, it’s pretty sanguine.

During that fateful crash stage, there were lots of shots of riders from different teams helping each other out, giving each other a push, just trying to get to the finish line and the medical tent. For a cycling fan, it’s a great thing to see. I’ve been banging on about how real cyclists are, how lovely they are with their fans and here’s just another reason to love them. This is what Koen de Kort, Dean Downing and Greg Henderson had to say about that.

Hansen takes on the Gorilla … AND WINS!

There was much talk about the new round helmets that some of the teams have been wearing. Looked strangely familiar to Mr Hansen and Mr Henderson agreed.

Oh, well, that’s all for Tweets for this week – I’ll leave you with Hansen’s instructions on how to ride the Tour.