This image is © Panache/ccarls1. Please provide appropriate credit if publishing the image elsewhere.

Sky’s Bradley Wiggins and Chris Froome smoked the opposition and registered the first ever British one-two in a Tour stage. It was also Wiggins’ maiden win and brings Britain’s – and Sky’s – tally to three victories in this year’s race. The British duo ignited the stage, simultaneously setting the timing screens ablaze. Wiggins put further distance between himself and defending champion Cadel Evans (BMC), while Froome elevated himself to third overall.

Wiggins, last out of the start house and resplendent in a translucent yellow skinsuit, was quickest through both intermediate checks before setting a final time of 51:24 (averaging 48.4kph), 35 seconds ahead of teammate and stage seven winner Froome. Evans put up his trademark gritty fight but finished sixth, 1:43 down on Wiggins, most of which he lost in the first part of the parcours. Wiggins is now 1:53 ahead of the Australian, with Froome a further 14 seconds behind in third.

Vincenzo Nibali (Liquigas-Cannondale), conceded 2:07 and slipped from third to fourth, but nonetheless this was a better-than-anticipated performance from the Sicilian. Putting his result into perspective, Russian national time trial champion Denis Menchov (Katusha) finished a second down on Nibali.

Questioned after the podium presentation, Wiggins expanded on his more than satisfactory day:

2010 Vuelta winner Vicenzo Nibali (Liquigas-Cannondale) turned in the time-trial of his life to stay within touching distance of the podium. Don’t be deceived by those long-lashed chocolate brown eyes and shy smile, not for nothing is he called the Shark of Messina. While other riders might be expected to attack when the road turns up, expect Nibali, one of the finest proponents of the art of descending, to be eyeing the technical descents. I suspect he’ll be lighting candles and praying for rain on stage 16 to Bagneres du Luchon which features a tricky 16km dash down the Col de Peyresourde to the finish line.

Nibali has expressed a desire to win all three Grand Tours. In my opinion, he could have won the Giro d’Italia in 2010 had he not been required to ride in support of team leader Ivan Basso. If we’re to believe the rumours, he’s off at the end of the season to pastures turquoise and a big fat pay cheque. I appreciate why, but am not convinced it’ll help him achieve his objectives.

Twitter today was full of comment about Bradley Wiggins‘ inflammatory and profane response in yesterday’s press conference to accusations that he wasn’t riding clean:

Honestly they’re just f*****g w*****s. I can’t be doing with people like that it justifies their own bone idleness … because they can’t ever imagine applying themselves to anything in their lives.

And it’s easy for them to sit under a pseudonym on Twitter and write that kind of shit rather than get off their arses and apply themselves and work hard at something and achieve something.

If today’s storming victory was the result, maybe the Twitterati should wind him up more often!

Meanwhile L’Equipe took to a detailed analysis of his position on the time trial bike while French television poured over the minutiae of Sky’s meticulous planning and preparation as if somehow it wasn’t playing the game. It was all rather amusing. [Damn Sky for being so, well, professional – Ed.]

Obviously there was no change today in either the points jersey worn by Peter Sagan (Liquigas-Cannondale) or the polka dot jersey worn by Frederik Kassiakoff (Astana). Tejay Van Garderen (BMC) almost beat Fabian Cancellara (RadioShack-Nissan) , but was successful in regaining the young rider’s white jersey from Estonian national time trial champion Rein Taaramae (Cofidis), who he now leads by 40 seconds.

To understand today’s winners and losers, you only have to look at the current overall standings:

I think it’s fair to say that a large number of teams will be revising their strategy over the dinner tables this evening while Sky will be enjoying a small celebratory glass of champagne. Elsewhere, comparisons are being made with Miguel Indurain. I reckon Wiggins will appreciate being likened to his childhood hero and one who won the Tour five times in succession!

But let’s not get complacent. There’s still a long way to go and anything can happen but not if Sky team chief David Brailsford has anything to do with it. He will be mindful of the gathering threat of a temporary Russo-Italian-Aussie alliance when the roads turn uphill upon the resumption after tomorrow’s rest day, and how he chooses to deploy Froome – conservatively, or send him out on the attack to put others on the back foot? – key mountains lieutenant Richie Porte and the powerful Mick Rogers and Edvald Boasson Hagen will be critical to controlling the race over the coming days. There are many miles still to run before Paris.

However, one prominent journalist spotted a worrying sign – at least if you’re the defending champion:

On today’s off-course itinerary, not the best omen for Evans. twitter.com/friebos/status… 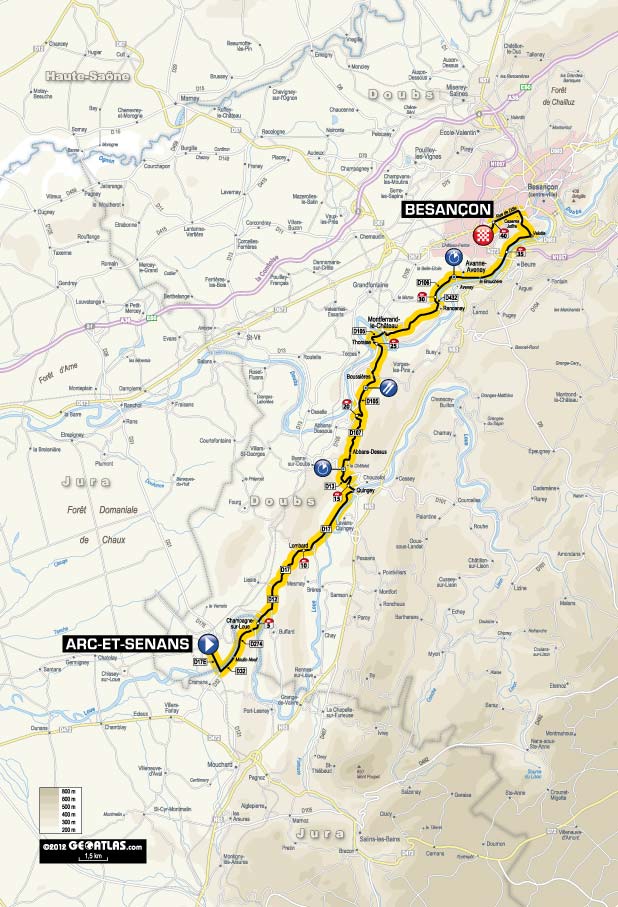 The first of the all-important individual time trials is the challenge facing the riders today. The first 20km or so have some rolling climbs, before flattening out to the finish, but nothing too technical for anyone.

All the main GC contenders will want to leave it all out on the course. The TT specialists, like Bradley Wiggins, Cadel Evans and Denis Menchov, will want to put the climbers on the back foot. The climbers, like Frank Schleck, Jurgen van den Broeck and Pierre Rolland, will want to limit the damage.

The battle for the stage win itself will demand sheer power and grit and will most likely be contested by time triallers extraordinaire Tony Martin and Fabian Cancellara, in anticipation of their London 2012 showdown. Neither overly exerted themselves on yesterday’s seven-climb stage, both coming in 12 minutes behind the leaders and holding back a little bit of energy for today. But watch out also for Saturday’s winner Chris Froome, who could set himself up for a potential podium finish if he can repeat his performance at last year’s Vuelta time trial, where he placed second behind world champion-to-be Martin.

Cycling the Alps’ interactive videos of the route can be found here.