But with around 20km to go the racing took a nervous, twitchy turn as the pace ramped up in the peloton. There were two crashes in quick succession, one caused by a camera-wielding, over-eager spectator, which effectively wiped out the entire second half of the peloton. After the crashes, first BMC and then Lotto-Belisol took up the pacemaking, after Jens Voigt (RadioShack-Nissan), who had been sat on the front for nearly the entire day, fell backwards.

The breakaway were caught with 9km to go. As the steepest part of the concluding 2.4km climb took hold, the attacks started. The most notable came from French favourite Sylvain Chavanel (Omega Pharma-Quick Step). But he failed to force a gap, and with just over 1km remaining the maillot jaune Fabian Cancellara (RadioShack-Nissan) gloriously launched himself out of nowhere, with Peter Sagan (Liquigas-Cannondale) locked on to his wheel. Cancellara impressively led himself and Sagan away off the front, with Edvald Boasson Hagen (Sky) eventually bridging across. Unsurprisingly, the in-form Sagan sprinted away from the duo to take his first Tour stage win in style. Cancellara impressively held off Boasson Hagen to finish second. 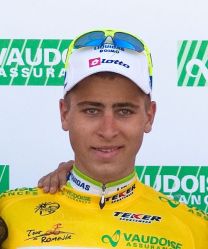 As predictable as it may be, the rider of the day must go to Peter Sagan.

Unlike Philippe Gilbert, who finished fourth, Sagan lived up to expectations with a terrific victory, his 14th of the season. With his ability to stay strong on hilly climbs there is very little that he can’t do, and he will provide a strong challenge for the green jersey, for which he is the favourite.

It will be fascinating to see if the 22-year-old Slovakian national champion can match the likes of Mark Cavendish (Sky) and Andre Greipel (Lotto-Belisol) on the flatter finishes. He rode intelligently here, deliberately riding behind Cancellara, anticipating an attack from the current race leader:

It was a good day today, the finale was very hard. I knew Cancellara would attack so I stayed behind him. I did not overtake him before the final stretch because he was riding so fast.

It was the second consecutive year that a spectator-induced crash claimed numerous big names, as Thomas Voeckler (Europcar), Luis Leon Sanchez (Rabobank) and Maxime Monfort (RadioShack-Nissan) were amongst the riders who went down, after Alberto Contador was taken out early in last year’s edition.

One of my favourite moments of the stage was Saxo Bank’s Michael Morkov celebrating like he’d won a stage after learning out on the course that he had done enough to take the polka dot jersey. The Dane is 27years old and has been a professional since 2005, but finding out he was the Tour’s King of the Mountains brought back the enthusiasm and excitement of a young neo-pro. Congratulations, Michael!

World time trial champion Tony Martin (OPQS), who suffered a puncture in yesterday’s peloton, crashed early in the stage and rode in pain to the finish. It was initially suggested that he had abandoned with a broken collarbone, although it was later reported that he had a wrist injury and a final decision had not yet been made.

Sagan‘s victory was an exercise in good strategy and perfect timing. Whereas Sylvain Chavanel‘s attack came too early to have any chance of holding off the entire field, Sagan coolly locked on to the yellow jersey’s wheel and was in perfect position to track his attack. As at Milan-San Remo earlier in the year, Cancellara was a victim of his own strength as his rivals forced him to lead-out and the Slovak picked his moment to accelerate away for an easy win. Nonetheless, the fact that the maillot jaune was still able to hold off Boasson Hagen was mightily impressive. There can be no doubt: Cancellara is back and fully fit again.

The bunch was quick enough in the closing metres to eliminate any time losses for most of the GC contenders. However, Levi Leipheimer (Omega Pharma-Quick Step) and Jerome Coppel (Saur-Sojasun), who finished 14th overall last year, lost 17 and 23 seconds respectively, Chris Horner (RadioShack-Nissan) almost a minute, and Bradley Wiggins‘ mountain lieutenant Chris Froome (Sky) was 1:25 adrift after a late puncture.

In collecting three points and the race’s first polka dot jersey, Morkov provided a much-needed lift for the beleaguered Contador-less Saxo Bank-Tinkoff Bank team. With just a single point available in tomorrow’s stage, he will spend at least another day in the jersey, and will no doubt be keen to get into the break the following day to try to protect his lead. With no GC contender, expect to see them animating breakaways on a regular basis.

At the intermediate sprint Matt Goss (Orica-GreenEDGE) won a hotly contested gallop from the main bunch, beating Mark Cavendish (Sky). Despite Cavendish downplaying his focus on the points classification, he did clearly contest the sprint, and must therefore still consider a second consecutive maillot vert as a possible option, no matter how much he suggests otherwise.