The Route du Sud is the last chance saloon for any of the French riders still hoping to secure their Tour de France berth. Now in its 36th edition, it takes place from Thursday 14th to Sunday 17th June in the spectacular French Pyrenees. Some will use this race as a warm-up for the Tour de France, although many top riders consider it to be too hard and too close to the Tour for preparation. The field is mostly made up of domestic and pro continental riders who come July, like you and me, will be watching the Tour de France on TV. 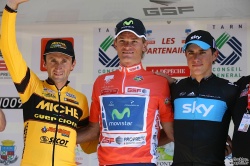 Vasiliy Kiryienka, having taken the race leader’s jersey on Saturday’s queen stage, finished safely in the bunch the following day to secure the overall, his third win of the 2011 season and Movistar’s 21st. The victory provided some much needed cheer after the tragic death of Xavier Tondo and the life-threatening injury to Mauricio Soler. The wily veteran Stefan van Dijk (Verandas Willems) took the first stage sprint and the  leader’s jersey, ahead of youngsters Tony Gallopin (Cofidis) and Romain Hardy (Bretagne-Schuller).

The following day’s stage over the Cols d’Aspin and Tourmalet was won by 2010’s Tour de France King of the Mountain, Anthony Charteau (Europcar), who outmanoeuvred Kiryienka in the final kilometre to move into the overall lead after the duo had ridden away from their three breakaway companions over the summit of the Tourmalet.

On day three, Jurgen Van Goolen (Verandas Willems) took a fine solo and his maiden victory at Bagneres de Luchon while Kiryienka moved into the overall lead after another tough day in the Pyrenees. The stage winner was part of an early 12-man break that formed ahead of the Col de Mente who went for broke on the descent and held on to win.

The final, relatively flat stage was reckoned to be one for the sprinters and, after 30km of fast-paced racing, five riders escaped including the stage winner, Luis Angel Mate (Cofidis) who dominated his breakaway companions in the sprint for the line to take his maiden victory in a Cofidis jersey. Kiryienka finished safely in the peloton to retain the overall and win the 35th Route du Sud.

The four stages will cover 733km and some great climbs in the Pyrenees. Stage three looks like a parcours worthy of the Tour. Indeed, the Route du Sud often uses routes and climbs that later feature in the Tour de France. It has been rumoured that the Tour will use Col du Spandelles in a forthcoming edition so it will be interesting to see who, if anyone, from ASO turns up for that stage.

Jon Tiernan-Locke: how will he fare? (image courtesy of Endura Racing)

The field contains many of the stage winners and some of those on GC who animated last year’s event. But in truth all eyes are likely to be on Thomas Voeckler (Europcar) and Endura Racing’s Jon Tiernan-Locke who, after winning a number of early season races, is just back from a recent collarbone break. There’s a number of South Americans racing, such as Movistar’s Nairo Quintano, who can be relied upon to enliven Saturday’s queen stage. Otherwise,  there’s a number of hard-working professionals, young and older, looking to register their first win of the season and maybe, just maybe, sneak into contention for the biggest race of the year.