Running from Sunday 3rd to Sunday 10th June, the 64th Critérium du Dauphiné is an eight-day stage race comprising a prologue and seven stages covering a total distance of 1,052km in the Dauphiné region. This will be the event’s third edition under ASO management and, just like last year, it will feature some of the same roads as the forthcoming Tour de France, making it an ideal test ahead of July. Riders with GC ambitions at the Tour will not want to miss this race.

Before 2010, the race was known as the Critérium du Dauphiné Libéré as it had been established by a local newspaper, the Dauphiné Libéré.  For many years, organisation of the event was shared between the newspaper publishers and the Amaury Sport Organisation (ASO) but in 2010 all organisational responsibility was ceded to ASO, and the race’s name was abbreviated. It’s an important race in the lead-up to the Tour de France and is part of the UCI WorldTour calendar.

It’s a mini Tour de France for the Tour contenders although, because the Dauphiné is a mountainous area, the race’s winners are often, but not always, climbing specialists and many famous Tour climbs like Mont Ventoux, Alpe d’Huez and the Col du Galibier frequently feature. All the cyclists who have won the Tour de France five times or more have also won the Dauphiné (Jacques Anquetil, Eddy Merckx, Bernard Hinault, Miguel Indurain and Lance Armstrong). Nello Lauredi, Charly Mottet and Hinault share the record for the most wins, with three apiece.

The most recent winners of the race, none of whom have gone on to win the Tour, are:

Bradley Wiggins (Sky) took the leader’s jersey after the Grenoble time-trial and rode an intelligent race to retain the overall and chalk himself up as a bona fide Tour threat.

Lars Boom (Rabobank) won the short prologue by 0.02 of a second from Alexandre Vinokourov (Astana). On the first stage, Juergen Van Den Broeck (Omega Pharma-Lotto) soloed to victory, having attacked and stayed away on the final climb of four, to finish on the summit ahead of  the leading bunch. Vinokourov took over the leader’s jersey.

John Degenkolb (HTC-Highroad) beat the diminutive Samuel Dumoulin (Cofidis) with a powerful sprint for the line on the stage from Voiron to Lyon. A split in the peloton in the last 10km forced teams Sky and BMC to chase hard to get back on and preserve the chances of their respective team leaders. Vinokourov retained the overall going into the important 42km individual time trial round Grenoble.

Tony Martin (HTC-Highroad) took an early lead with a time of 55:28 in adverse weather conditions which improved slightly for the leading riders. Martin had led at all the intermediate check points except the last where he’d been matched by Wiggins, who subsequently finished second but more importantly well ahead of overall leader Vinokourov, who dropped to fourth. Wiggins took over the leader’s jersey, 1:11 ahead of BMC’s Cadel Evans.

The following day’s test was decided after Rodriguez made the decisive attack on the last part of the climb to Le Collet d’Allevard from the leading group. He was initially joined by Vinokourov but proved too strong for the latter. Wiggins finished a handful of seconds back to preserve his advantage.

Despite having a healthy cushion of 1:26 over Evans going into the final stage, Wiggins made sure he didn’t lose any time to his rivals on the final ascent of the Montee de la Toussuire by just sitting on the back of the leading group. While the others tried to make the going tough, Wiggins was impassive and finally, with under a kilometre to the finish, Rodriguez attacked to take his second consecutive stage win and scoop the points and mountain’s jerseys. Jerome Coppel (Saur-Sojasun) was the best placed young rider while Europcar were top team.

The eight-day race begins with a prologue in the city of Grenoble, the place where Cadel Evans (BMC) took the yellow jersey on the penultimate day of last year’s Tour de France, having checked out the exact route in the Dauphiné only weeks beforehand. At only 5.7km, the Grenoble stage will not be so decisive this time around.

Stage one’s 187km, a flat westward route between Seyssins and Saint-Vallier, will be one for the sprinters. Stage two offers medium mountains and a short, sharp rise to the finish. It will use the same route as the popular Ardechoise cyclosportif ride and we could see an early selection in the race’s general classification. The flat stage three will provide another opportunity for the sprinters, honing their trains ahead of July, before the race’s long time trial.

The first crucial day is stage four, a 53.5km individual time trial from Villie-Morgon to Bourg-en-Bresse. This ties in with the Tour which will offer a time trial of identical length for the penultimate stage. For the Dauphiné, this is an unusually long time btrial and large time gaps will most likely open up over the flat to rolling roads. Having arrived at the foot of the Alps, the following day the peloton will head into the mountains for two tough stages.

Stage five features the Grand Colombier, a new climb for the Tour de France, but a long-term fixture on the Tour de l’Ain, a small stage race held every August. The road hasn’t been used in the Dauphiné since 1988, and has some quite steep ramps. It’s been called the French Zoncolan, which is a bit of an exaggeration but neither is it your average alpine pass. Instead the road winds to the top of the mountain and, instead of gradients of 6-8%, the slope is 10% and hits 14% in places. This climb will also feature in stage ten of the Tour , so this will be something of a dress rehearsal. 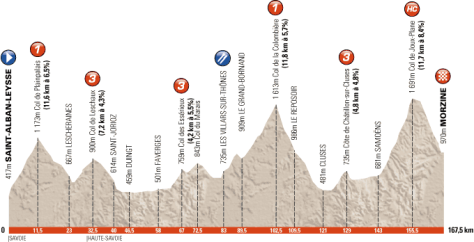 While there is no high summit finish in this year’s race, stage six between Saint-Alban-Leysse and Morzine is almost as tough. The 166.5km kicks off with the category one Col de Plainpalais, then after 64km there’s another with the Col de la Colombiere, before the day’s most strenuous climb, the hors categorie Col de Joux-Plane, just 12km from the finish, from whence it’s a sharp descent to the ski resort.

Having survived some of the toughest alpine climbs, the final day from Morzine to Chatel, is both short and hilly finishing with the category one Col de Corbier and a category three climb to the finish.  ASO will no doubt hope it goes down to the wire.

Anyone who’s got Tour de France pretensions will be taking part assuring us of a mouth-watering array of lycra-clad lovelies. This is where battle commences for top honours in the Tour. We have the defending champion, Paris-Nice and Tour de Romandie winner Bradley Wiggins (Sky), four-time Dauphiné runner-up and defending Tour de France champion Cadel Evans (BMC), 2010 Tour de France winner Andy Schleck (RadioShack-Nissan), former winners Janez Brajkovic (Astana) and Alejandro Valverde (Movistar), plus Tirreno-Adriatico winner Vincenzo Nibali and Olympic champion and Vuelta al Pais Vasco winner Samu Sanchez (Euskaltel-Euskadi). After his recent exertions, Giro d’Italia runner-up and current world number one Joaquim Rodriguez will not be present, but then he won’t be riding the Tour either.

In total, six of the nine riders who achieved podium finishes in the three Grand Tours of 2011 will be riding in the Dauphiné. Indeed, the duel that lit up the Vuelta a Espana 2011 between Juan Jose Cobo (Movistar) and Chris Froome (Sky) could continue in this year’s Dauphiné.

French riders will also hope to capitalise on their recent feats. Most eyes will be on Europcar’s Thomas Voeckler and Pierre Rolland, but Pierrick Fedrigo (FDJ-BigMat) , Christophe Le Mevel (Garmin-Barracuda), Sylvain Chavanel (Omega Pharma-Quick Step) and Jerome Coppel (Saur-Sojasun) will be hoping for a good placing on general classification.

More importantly, the rank and file will be hoping to either seal a place on their team’s Tour squad or steal a place from those still up for grabs. There’s lots at stake in this race.

Here at VeloVoices we’ll be keeping a firm eye on 22-year old neo-pro Pello Bilbao (Euskaltel-Euskadi) who surprisingly entertained us in the Ronde Van Vlaanderen. Like many in the team he came up through the Euskaltel feeder squad and placed second in last year’s Tour de Vendee.

The Critérium du Dauphiné starts on Sunday 3rd June and concludes on Sunday 10th. There will be daily live coverage on Eurosport. For other channels check cyclingfans.com.