Stage profile: A rolling stage with a couple of tricky climbs in the final 40km before an uphill finish which features two 9% ascents in the final 5km.

Who was in the breakaway?: Martijn Keizer (Vacansoleil-DCM) featured in the day’s escape for the second consecutive stage, alongside Miguel Minguez (Euskaltel-Euskadi), Guillaume Bonnafond (AG2R La Mondiale), Matthias Brandle (NetApp) and Francesco Failli (Farnese Vini-Selle Italia). They built a lead of nearly five minutes before the peloton patiently reeled them back in. Despite being bolstered by the addition of Rabobank’s Stef Clement, they were caught with 7.5km to go.

How the stage was won: The action kicked off in the final 4km on the steep, narrow climb into Assisi, which comprised two punchy ascents sandwiching a 1km downhill. Orica-GreenEDGE’s Tomas Vaitkus attacked first, before Tom-Jelte Slagter (Rabobank) put in a pair of accelerations which strung out the shrinking lead group. Rigoberto Uran (Sky) and John Gadret (AG2R La Mondiale) attacked on the descent, but they too were eventually pulled back. With Joaquim Rodriguez‘s Katusha teammate Dani Moreno initially leading the way on the final ascent full of narrow streets and momentum-sapping switch-backs, it was left to Slagter to provide an inadvertant lead-out for Rodriguez, who sat patiently on his wheel before kicking with about 150 metres to go to win by two clear seconds and, with the 20-second win bonus, claim the maglia rosa. Slagter faded to finish seventh, just behind outgoing race leader Ryder Hesjedal, who struggled on the climb but held on to minimise his losses six second behind, in a group containing all the main contenders other than Frank Schleck.

Quote of the day: Ryder Hesjedal was typically gracious in conceding the pink jersey to Rodriguez, but promised his race was far from over:

I knew it would be difficult to keep the jersey today. This finale is perfect for Purito. He’s a classy rider and Katusha took control of the stage today, so hats off to him.

It’s been an amazing three days. Couldn’t ask for more. I am looking more toward the third week. That’s where I am usually at my best. That’s where everything is decided.

Odd occurrences: The unusual sight of the world champion’s rainbow stripes pulling on the front of the peloton for a while. Sky’s Mark Cavendish turned domestique for the day, working on behalf of climbing teammates Rigoberto Uran and Sergio Henao, but he soon reverted to his normal position for an uphill finish, hanging grimly off the back of the main bunch.

VeloVoices rider of the stage: Tom-Jelte Slagter (Rabobank). The 22-year old is best known for a heavy crash on his Giro debut last year, but while the favourites were all eyeing each other he attacked repeatedly to animate the finish and earn himself a high placing (seventh). Certainly Rodriguez should thank him for providing the perfect lead-out.

Tomorrow: Stage 11 – Assisi to Montecatini Terme, 255km. Skirting around Florence, a marathon 255km stage – the longest of this year’s race – will be defined by the fourth category Vico climb (3.3km, 5.2% average) whose summit sits just 11km from the finish line. It’s sufficiently steep and narrow to set up an opportunistic attack, so expect a tussle at the front of the peloton between the want-away puncheurs and the tired legs of the sprinters’ teams who will seek to control the tempo. 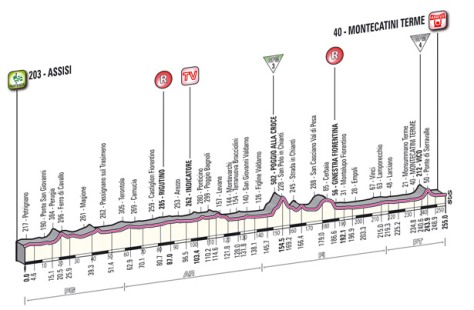 And here is Cycling the Alps‘ fly-over of the route: