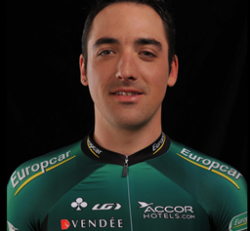 Europcar’s Turgot used every ounce of his track skills  – he was the French national Madison champion in 2008 – to narrowly beat BMC’s Alessandro Ballan in the Roubaix velodrome and take a well-deserved second place in Paris-Roubaix last weekend. Turgot’s the first French rider to make the podium since Frederic Guesdon (FDJ-BigMat) triumphed 15 years ago.

Turgot, who didn’t figure on anyone’s list of favourites (except perhaps his wife’s and mum’s) put in a series of attacks just before what turned out to be Tom Boonen’s race-winning move.

Hesitation having cost him the opportunity to latch onto Tom’s wheel, the Frenchman contributed to the ten-strong chasing group but appeared to tire inside the final 10km. However the tenacious Turgot, along with Tom’s team mate Niki Terpstra, fought back to get onto the wheels of the chasing trio of Ballan, Juan Antonio Flecha (Sky), and Lars Boom (Rabobank) just as the bell rang in the velodrome for their final lap. Boom dropped off the pace while only Turgot and Ballan appeared to want to contest the sprint for the line. 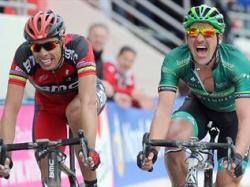 Barely a fag paper in it! (image courtesy of Europcar)

Third in Paris-Tours in 2008, Turgot has now underlined his credentials as a Classics specialist and promised after the race that his best was yet to come. He explained to L’Equipe:

This is not a victory. This is a second place. I was here to win, but second place is great, extraordinary. With the team, we made so many sacrifices to have a successful Classics season. It is a reward for the team.

Europcar team manager Jean-Rene Bernadeau was ecstatic with the result, praising Turgot’s work in the team over the past seven years:

It’s enormous for Sebastien, it’s really a great story. We are truly happy and it’s a great reward for all the hard work put in by our directeur sportif Dominique Arnould, who has installed a true Flanders culture within our group. These results [including Thomas Voeckler’s 8th place at Tour of Flanders] prove we can hold our own in the Classics and that we’re not just a team for the stage races.

Here’s how Sebastien just shaded it on the line to take second place but you have to watch Tom win first: