I’m following the progress of three stage racers in 2012: arguably the greatest of his generation, Alberto Contador – currently taking an extended break – Astana’s Alexandre Vinokourov – enjoying his swansong season –  and AG2R’s Nico Roche – hoping to build on his promising 2010 results. None of my riders have collected any UCI points and, bizarrely, the rider who’s not been competing has been generating the most column inches. Here’s a quick summary of what they’ve been up to (or not) over the past couple of months.

Alberto now has a bit of time on his hands which may allow him to indulge in other activities. He recently tweeted this photograph and I’m wondering whether he’s limbering up for an appearance on his country’s version of Strictly Come Dancing. He wouldn’t be the first cyclist to participate in this event – Cipo [Mario Cipollini – Ed] and The Chicken [Michael Rasmussen – Ed] have both competed – and I’m betting he’d be a dab hand at the tango.

Nonetheless, he’s found time in his busy schedule to lend his support to the beleaguered Tour of the Basque Country and his former team, whom he congratulated on retaining their UCI World Tour licence, for now. There’s been some speculation that due to a team-imposed doughnut ban that Alberto won’t be returning to them when his ban expires. I have witnessed Alberto’s sweet tooth first hand, indeed many of the skinny Spaniards are fond of their pastries and, on the basis of a little of what you fancy does you good, I have to say, why not? 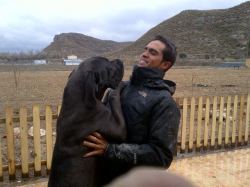 Speculation is rife that he might seek solace in the arms of a more sympathetic team – we’ll just have to wait and see.

One of Alberto’s hobbies is raising birds and I was a bit concerned to see him with this dog which frankly was regarding him pretty much as he might a doggie choc drop and as for any fluffy birds, well, they’d just be little amuse bouches!

Nonetheless, he’s continuing to train and now has some new kit emblazoned with messages of support [is yours on there? – Ed] from his numerous fans as he explains in this short clip. 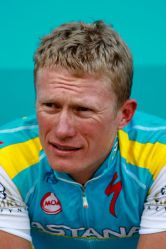 In Alex’s final season he’s indulging himself with a bit of a trip down memory lane while playing a very different role in the team of which he was formerly its leader. In particular, he’s been giving the younger members of the team the benefit of his many years’ experience – a commendable role – as he explains in this video interview with Velonews. The interviewer’s not the only one who’s struggled with interviewing Alex. I recall one likening it to watching paint dry. Alex, not unnaturally, is wary of journalists, and is much happier giving interviews on his terms in either Russian or French.

Although he finished halfway down the final general classification at the ten-day Tour de Langkawi, Vinokourov – ever the showman – ensured this was not an armchair valedictory ride. He put in a big shift as Astana led the chase-down of the day’s breakaway on stage four, and lit up the concluding tenth stage as the last member of the final break to be caught, holding out until 2.5km from the end.

Alex is giving the Ardennes Classics a miss with a view to competing both at the Giro d’Italia and the Tour de France. The latter is quite likely to be his last competitive appearance, apart from a few criteriums.

Results: 13th in bunch sprint finish at GP Lugano. 20th overall at Paris-Nice. Did not finish at Volta a Catalunya.

Roche finished 13th at the GP di Lugano, seven seconds behind winner Eros Capecchi (Liquigas) before moving on to Paris-Nice. Here he rode consistently to finish 20th overall, 6:28 down on Bradley Wiggins, including a seventh-place finish in the final sprint on stage four in Rodez.

Like a lot of riders, Roche was laid low after Paris-Nice and was forced to withdraw from the subsequent Volta a Catalunya. However he’s obviously recovered from whatever ailed him as he’s taking part in today’s Paris-Camembert. [Does the winner get given a big cheese? – Ed]

However, it’s not all doom and gloom in the Roche household as his younger brother’s enjoying a fine start to his season on the Cote D’Azur.

Well done to my brother Alexis for his 3rd place in gp antibes underage race! Go for it today in monaco criterium!!