Samuel Sanchez (Euskaltel-Euskadi) won the queen stage and the final individual hilly time-trial to take the overall win (and the points jersey) in Vuelta al Pais Vasco, earning himself an even larger place in the hearts of the Basques. He became only the second Euskaltel winner of the stage race after Iban Mayo in 2003.  Miguel Madriaga, the Euskaltel team manager was delighted – just the boost he needs in his search for further sponsors. I’m sure the local bank Sabadell Guipuzcoano – who stepped in at the last moment to save both this race and the Clasica San Sebastian – will have been pleased with the return on their investment.

Joaquim Rodriguez (Katusha), also a double stage winner, rode the time trial of his life to finish second overall and win the prize for ‘most elegant rider’. His Katusha team won the team prize. Equally, best young rider Bauke Mollema (Rabobank) rode a ballsy time trial in the pouring rain to move up on GC and round out the podium. Marco Pinotti (BMC) won the sprints jersey, while Saxo Bank’s Mads Christensen was top dog in the mountains and adjudged most aggressive rider. David Lopez (Movistar) was the best placed Basque rider.

Here’s how the race unfolded.

Jose Joaquin Rojas (Movistar) bounced back from his Gent-Wevelgem crash to win the opening stage’s bunch sprint, squeezing past Wout Poels (Vacansoleil-DCM) and Fabian Wegmann (Garmin-Barracuda) on the downhill run-in to the line. 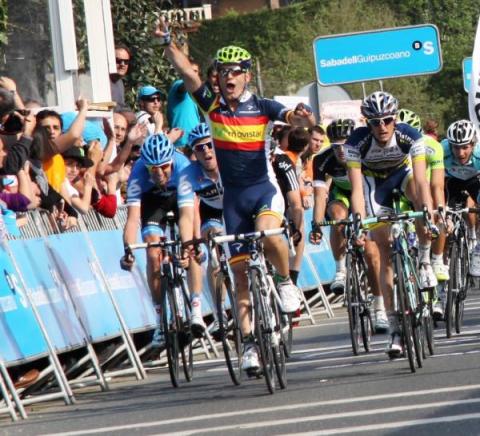 After the bad streak at the start of the season, with so many problems, such a victory does really well for my morale. I haven’t worn a yellow jersey since the 2007 Vuelta a Murcia – grabbing it in the Basque Country, with some of the best fans in the world, makes me really proud.

Davide Mucelli (Utensilnord Named) and David De La Fuente (Caja Rural) – riders from the two wild card teams – spent most of the day out front gathering sprint and mountains points to land the respective jerseys. They were caught by the peloton on the last of the stage’s seven climbs, Alto de San Comse, which prompted others to have a go. A couple of crashes ended some riders’ GC aspirations – including defending champion Andreas Kloden – and it all came back together for a bunch sprint to the line where Rojas timed his effort to perfection.

Impey confirmed the team had been trying to set up teammate Davis for the win:

We were riding for Allan [Davis]. When I found myself with the gap, I decided to take it. It’s a massive victory – definitely the biggest moment in my career.

Thibaut Pinot (FDJ-BigMat), Mads Christensen (Saxo Bank) and Jerome Pineau (Omega Pharma-Quick Step) rode off after just seven kilometres and were later joined by Julian Sanchez (Caja Rural) and Gabriele Bosisio (Utensilnord Named). Despite the cold, wet conditions, the group enjoyed a lead of more than seven minutes before being taken back by the peloton on the sixth and last climb of the day, the cat. 3 Alto de Zaldiaran, 13km from the finish in Vitoria-Gasteiz.

This prompted others to attack on the last ascent, but Astana were having none of it. They were trying to set up their sprinter Francesco Gavazzi for the bunch sprint but ran out of steam. GreenEDGE then took over and while trying to set up Davis, Impey seized the initiative and soloed up the road to victory.

Olympic champion Samu Sanchez (Euskaltel-Euskadi) demonstrated how to win – for the third consecutive year – on the summit finish of stage three’s cat. 1 Alto de Usartza, the seventh climb of the day. He also took over the race leadership and the points jersey. Samu pounced with Joaquim Rodriguez (Katusha) and 2010 race winner Chris Horner (RadioShack-Nissan) 5km from the finish and held the chasing pack at bay. 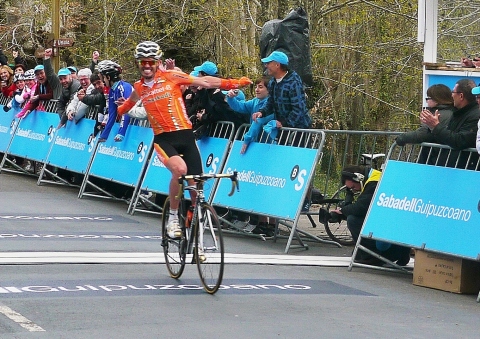 The peloton had swept up the remnants of the day’s numerous escapees at the foot of the final climb, prompting Horner to launch an attack, quickly followed by Robert Kiserlovski (Astana), Rodriguez and Michele Scarponi (Lampre). But it was quickly neutralized leaving Sky’s Sergio Henao to drive the peloton until Purito launched the decisive attack. Horner and Sanchez followed in hot pursuit.

Despite the cold and wet weather, the hill was lined with fanatical Basque fans who’d either ridden or walked up. Only a Basque win would do. Samu, who knows the hill, marked time, launching his attack on the slight descent to the finish, and the other two were unable to respond.

Yellow jerseys all round for Joaquim Rodriguez and son (image courtesy of Susi Goetze, CyclingInside)

The 18% finish on the last 500m of  cat. 1 Alto de Ibardin mountain finish had Joaquim Rodriguez’s name writ large on it and he duly obliged, taking the stage and the overall lead. Samu Sanchez limited his losses to nine seconds to take second place while Sergio Henao (Sky) was third. Rodriguez was delighted and dedicated the win to Igor Makarov, head honcho at Katusha:

I’m very happy with this victory. It came on just the right day because Igor Makarov celebrates his 50th birthday today. This win is obviously for him and for his effort to bring Katusha to the top of world cycling.

It was another cold, wet day and the initial fast pace [probably trying to keep warm – Ed] prevented any successful breaks. After 40-odd kilometres, Evgeny Petrov (Astana) managed to slip away in the company of Maciej Paterski (Liquigas) only to be joined by three further riders: Angel Madrazo (Movistar), Diego Ulissi (Lampre) and Marcos Garcia (Caja Rural) and, much later, Simon Clarke and Wesley Sulzberger of GreenEDGE.

The seven were subsequently joined by Ibardin local Patxi Vila (Utensilnord Named), Danish national champion Nikki Sorensen (Saxo Bank) and Volta a Catalunya winner Michael Albasini (GreenEDGE) on the Alto de Ibardin. But the group splintered under pressure from Katusha, who were leading the chase to set up their team leader for the win. Albasini was the last to be taken back, just under 3km from the finish.

Inside the final 2km there was a large group of around 25 riders out of which Maxime Monfort (RadioShack-Nissan) attacked, only to be chased down by Simon Spilak (Katusha). Then Frank Schleck (RadioShack) went on the offensive under the red kite for teammate and 2010 race winner Chris Horner. As the road went vertical, Wout Poels and then Sergio Henao chanced their arm [don’t you mean legs? – Ed] but none could prevent Rodriguez’s successful lightning strike.

Joaquim Rodriguez successfully defended his overall lead, beating Samu Sanchez in the sprint for the line. A valiant Robert Kiserlovski (Astana) was third. The Spanish duo attacked with about 3km to go and caught and overtook a tiring Kiserlovski – who’d been off the front for 50km – before going mano a mano in the final kilometres.

Today’s stage, the longest of this challenging race, wasn’t the most testing, but the cold and wet conditions for the fourth consecutive day took their toll on the riders, of whom only 122 finished. It was a day of attacks and counter-attacks which left the peloton in pieces.

Kiserlovski was part of a nine-man attack which included Italian time-trialists Marco Pinotti (BMC) and Adriano Malori (Lampre). But he left them behind and, with 10km remaining, built what looked to be a healthy cushion. He was undone in the final kilometres by an unexpected short punchy uphill where he was caught and overtaken by the two Spaniards.

After the stage, Rodriguez confirmed that the plan had been to put as many seconds as possible into the better time-trialists such as Tony Martin (Omega Pharma-Quick Step) ahead of Saturday’s final time trial. Martin and Chris Horner (RadioShack) both conceded 23 seconds. He said:

I am very happy. I knew there was a climb in the end and I wanted to give it a try, not to win the stage but to take some time on the other favorites ahead of tomorrow’s time trial. I got some time today that might allow me to be on the podium, but seeing how Samu is right now I hope he can win the Vuelta al Pais Vasco this year.

Samuel Sanchez, the penultimate rider, slipped out of the start-house and up over the rain-slicked cobbles with the hopes of the Basque nation resting on his slender shoulders. Samu didn’t shirk his responsibilities, riding the time trial of his life on a hilly and technical course to take both the stage and the overall. 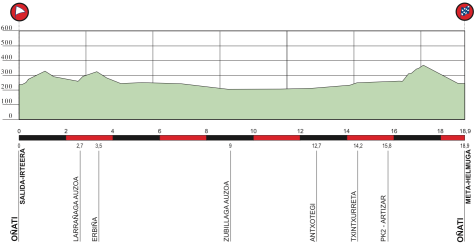 The stage profile  – benign yet deceptive – pictured above really doesn’t tell the whole story. It’s a difficult and technical course taking in cobbles [but we’re not in Belgium! – Ed], narrow pathways, a cycle path, short steep climbs of more than 20% and a twisting technical descent finishing on a slippery marble-paved pedestrian zone. It took real balls to go full out in the pouring rain.

Unsurprisingly, a number of the early competitors rode with a view to providing useful feedback for their better-placed teammates. But not the boys from GreenEDGE. First onto the course, Travis Meyer set the fastest time until he was overhauled by the Dutch champion Stef Clement (Rabobank), who went two seconds quicker at 29:10. Clement was in the hot seat for some time before being unseated by five-time Italian time trial champion Marco Pinotti (BMC) – in a lime green skin suit as holder of the sprints jersey – who went seven seconds faster.

Everyone was waiting for time-trial world champion Tony Martin (Omega Pharma-Quick Step) who blitzed the closing time trial in last year’s race, albeit in a different location. Nonetheless, he set the new fastest time at the mid-race checkpoint and on the line: 28:55. But Martin’s time was bettered by young Dutchman Bauke Mollema (Rabobank). The best indicator of what Samu might post was Damiano Cunego (Lampre), not noted for his time-trialing ability, who finished ten seconds behind Mollema.

The crowd was hushed listening to the live commentary in Spanish and Basque, imagining Samu’s every move over the technical course. He hoved into view wearing the points white skin suit emblazoned with orange, just like his bike. We were all counting down the seconds. Yes, he’d done it. He’d won both the race and the overall.

While this race lost a number of potential GC contenders through no-shows, injury, illness and falls, I believe the outcome would still have been the same. This was a parcours which suited the victor, Samuel Sanchez, on roads which he and his Basque team mates must know really well. However, home advantage aside, Sanchez measured and timed his efforts throughout the week to perfection and is now ranked third in the UCI world rankings.

A number of teams will leave the Basque country feeling very pleased with their leaders’ placing on GC, particularly ahead of the Ardennes Classics. While others will be delighted by the doggedness of some of their young guns, in the face of a very difficult week’s racing.

Sadly, friend of VeloVoices, BMC’s Amael Moinard was forced to retire from the race with digestive troubles. We wish him a speedy recovery.