The day dawned bright and clear for yesterday’s first stage of the Vuelta al Pais Vasco around the town of Guenes, 20km south-west of Bilbao nestling in the very picturesque and undulating Basque countryside. When we arrived, they were still putting up the finish line so it gave us an opportunity to look around, grab our accreditation and an all-important coffee and say hi to one or two riders. Shorn of my bike, thanks to a broken spoke, I was going to be enjoying today’s stage in the company of my friends Susi and Dom from CyclingInside who’ll be supplying Cycling News with photos of this event. 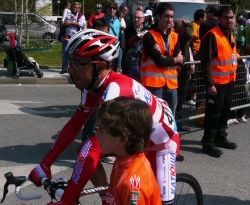 I find events such as these are very relaxed affairs in Spain. Yes, they’re well organised but they truly understand that the spectators want to get up close and personal with the riders, the kids  – possibly cycling stars of the future – want to have their photos taken with their heroes and everyone who’s come to watch in their thousands wants to grab a slice of the action and have an enjoyable day out. The organisers are complicit.Day one’s sign-on included the obligatory team presentation. Thereafter, riders had to run the gamut of hurdles. A whole host of kids, many in the local club cycling kit, hoping for a piece of their favourite rider: a cap, a bidon, a signature, a photograph, whatever … These kids were knowledgable, they knew who was who, who was hot and who was not.

There’s no television screen at the finish line, although there are three in the press room and one in the VIP tribune used by the commentators for a two-handed running race commentary in Spanish and Basque. Instead, the organisers give the appreciative and knowledgable crowd a course where the peloton traverses the finish several times before the conclusion of the race. Though, during the race, most of the local youngsters were on their bikes, out on the course, tackling those steep – but fortunately short – climbs to cheer on their favourite riders.

We too were out on the course watching the action unfold. Susi, channelling her inner Sebastien Loeb, was spinning wheels around the verdant Basque countryside while I hung on for grim death in the back. Surely a case of two wheels better than one. She’s an old hand at this and knows exactly where to position the car for a quick getaway. She even got a police car to move to allow her to do this.

After a whole host of action shots on the Alto del Suceso and Alto de la Escrita, we raced back to the press room at the finish to start sending them to Cycling News. Everyone else was glued to the action unfolding on the television screen and tapping patiently away. I couldn’t help but wonder if there was a prize for the first report to be filed? I made use of the facilities for a much needed comfort break.

Sadly, Susi was beset with technical problems and had to dash off to get the all-important photo finish and podium shots before returning to the press room for a long session in front of the screen. I wandered along to the finish line to watch the peloton thunder in. A Spanish winner [Movistar’s J J Rojas – Ed], albeit one from Murcia, and the crowd were happy.