The 52nd edition of the Vuelta Ciclista al Pais Vasco (in Basque, Euskal Herriko txirrindulari itzulia), a six-day WorldTour stage race, will be held this year from Monday 2nd to Saturday 7th April. It clashes with the Belgian cobbled Classics giving cobble-shy climbers a safe haven. The 2012 route was only officially announced in early March after the event had been rescued by a local bank from possible cancellation due to lack of funding. The event is organised by the leading Basque newspaper Diario Vasco.

The race was first run in 1924, and won by Frenchman Francis Pelissier, before undergoing numerous iterations and cancellations. It features on the palmares of riders such as Gino Bartali, Jacques Anquetil, Sean Kelly, Stephen Roche and Laurent Jalabert. It’s possibly one of the few races that Eddy Merckx never won. The all-time record holder is Jose Antonio Gonzalez, who won it four times in 1972, 1975, 1977, and 1978. The race was also famously featured in Ernest Hemingway’s novel The Sun Also Rises.

The event is considered to be one of the more challenging stage races as there are virtually no flat stages: plenty of mountains and a lumpy time-trial. The race’s winners tend to be riders who can both climb and time-trial. While climbs in the Basque country are not long, like those in the Alps or Pyrenees, they can be eye-wateringly steep. I speak from personal experience! The most recent winners of the race are: 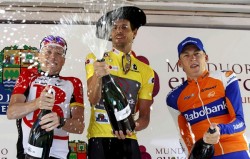 Andreas Kloden (RadioShack) won the overall a full 11 years after his previous win in the event to give RadioShack back-to-back victories. Continuing his form from Paris-Nice, he secured the overall with consistent daily performances and a strong final stage time trial where he finished behind an on-form Tony Martin (HTC-Highroad). Kloden beat 2010 champion and teammate Chris Horner for the title, with climber turned decent time-trialist [see, it can be done Andy! – Ed] Robert Gesink (Rabobank) in third place.

Joaquim Rodriguez (Katusha) won the first stage around Zumarraga by out-sprinting Samuel Sanchez (Euskaltel-Euskadi), Kloden and Horner. The foursome had broken away on the final climb of the day, the Alto de la Antigua, 3km from the finish.

Vasili Kiryienka (Movistar) won stage two’s 163km into Lekunberri having jumped out of the front group on the climb of the Alto de Azpiroz, to go onto record his first stage win since the 2008 Giro d’Italia. Kloden finished second to take the leader’s yellow jersey. Andy Schleck (Leopard-Trek) was third.

The following day, Alexandre Vinokourov (Astana) treated everyone to one of his trademark attacks – featured in the video above – with 4km to go to the finish. Three-time road race world champion Oscar Freire (Rabobank) won the sprint for second and his teammate Paul Martens was third. Rodriguez finished tenth to repossess the leader’s jersey by virtue of stage placings. Kloden dropped to second and Samu Sanchez was third overall.

Francesco Gavazzi (Lampre) won the penultimate stage after Freire, having crossed the line first, was declassified for alleged pushing from teammate Luis Leon Sanchez in the final straight. It’s fair to say Freire was not happy [typical Anglo-Saxon understatement – Ed] about the decision.

On the final day Tony Martin (HTC-Highroad) won the tough, hilly and technical time trial course in Zalla ahead of compatriot Kloden. But with 11 riders within 18 seconds of the lead and the top three tied, the real battle was for the overall. Going into the final stage Rodriguez, clad head to toe in yellow and looking like a canary was, once again, despite the parcours, undone by his lack of ability in this discipline and tumbled down the rankings. Likewise Samu Sanchez sank to sixth. Conversely, Robert Gesink (Rabobank) put in a blistering performance to move up into third place overall.

Kloden also took home the points’ jersey, Michael Albasini (HTC-Highroad) won the mountain’s jersey and Bram Tankink (Rabobank) won the sprinters’ jersey. Movistar were top team and Benat Intxausti (Movistar) was top Basque. No news on who was the most elegant rider or the most aggressive!

This year’s event takes place in the countryside between Bilbao and San Sebastian, in and around the regional capital in Vitoria-Gasteiz. It’s quite a small geographic area so that the riders and teams can spend the entire race based in the same hotel. It will however once again live up to its reputation as a tough race with an interesting [I assume that’s an ironic ‘interesting’ – Ed] route that includes two summit finishes, on stages three and four, and a closing-day individual time trial in Ornati. The parcours has plenty of trademark steep climbs on narrow roads to ensure both exciting racing and plenty of tension until the race’s conclusion.

Stage one around Guenas and stage two to Vitoria might happily be classified as lumpy, with six climbs apiece, but they’re only either cat. 2 or cat. 3 climbs of between 3-5km. As the race covers a relatively small area there’s a number of loops with certain hills either being climbed twice or from two different sides. This’ll keep the rabid Basque cycling fans on the roadside happy. 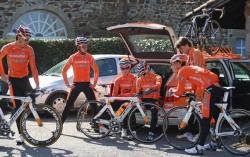 Stages three and four, as mentioned above, provide more of a sterner test. Stage three looks to be the more difficult with a total of seven climbs including two cat. 1 climbs, one of which finishes atop the Alto de Usartza, in Eibar. I do believe Samu Sanchez has won here before and he’ll probably be looking to do so again.

Stage four is similarly daunting but has only five climbs, climaxing on the 7km cat.1 climb up the Alto de Ibardin. With only five climbs, stage five might be called lumpy and possibly provides an opportunity for the sprinters: sprinters that can climb. Which leads us to the final stage, a 18.9km individual time trial which is both technical and rolling rather than hilly. Conscious that time trialling isn’t their forte, the entire Euskaltel-Euskadi squad recently reconnoitred the stage.

The 20 teams  – the 18 ProTeams plus Caja Rural and Utensilnord Named – are loaded with climbing talent, some of whom can time-trial and others who can sprint. It’s going to be an absorbing, enthralling, nail-biting race. Just look at who’ll be there: more stars than at the Oscars.

We’ve three recent winners taking part as RadioShack have both Andreas Kloden and Chris Horner with a strong supporting cast, including Frank Schleck, Jens Voigt and Maxime Monfort, ready to defend the yellow jersey. Movistar have 2007 champion Juan Jose Cobo, who comes from nearby Cantabria and, of course, Alejandro Valverde. GreenEDGE have the in-form UCI World Tour leader Simon Gerrans and Volta a Catalunya winner Michael Albasini. Astana have Janez Brajkovic – rumoured to shortly be appearing in Dancing on Ice [what?!? – Ed] – who’ll be assisted by Robert Kiserlovski and Frederik Kessiakoff. Liquigas have Vincenzo Nibali and Katusha have Joaquim Rodriguez who’ll be hoping to avoid a similar fate  – hero to zero – to last year. Sky have Michael Rogers, sprinter David Appollonio and local boy Xabier Xando.

Robert Gesink comes with strong backing in the form of Rabobank team mates Luis Leon Sanchez, Bauke Mollema and Steven Kruijswijk. While Damiano Cunego and Michele Scarponi will be leading the Hot Pink Pursuit™ for Lampre. Garmin-Barracuda come from nearby Girone with Dan Martin, Tom Danielson and Ryder Hesjedal. Lotto-Belisol have Jurgen Van Den Broeck and Jelle Vanendert. FDJ-BigMat have Arnold Jeannesson and Jeremy ‘It’s not a break if I’m not in it’ Roy, who’ll be heading off up those climbs, ahead of the pack, most probably in the company of Johnny ‘Razorpants’ Hoogerland (Vacansoleil-DCM).

VeloVoices will be watching Amael Moinard (image courtesy of BMC)

Super-team Omega Pharma-Quick Step haven’t left all their talent in Flanders. No, they’re bringing Tour de San Luis winner Levi Leipheimer, Tour of Oman winner Peter Velits and Tony Martin. BMC, fresh from their maiden win in Corsica, have a solid team with friend of VeloVoices Amael Moinard and Marco Pinotti. Ag2R, yet to break their duck this season, will be hoping that either Rinaldo Nocentini, John Gadret or Jean-Christophe Peraud can make that step up.

Finally the ‘home’ team Euskaltel-Euskadi, who’ve already picked up their first win of the season and have been dazzling everyone with their exploits on the cobbles, have come loaded for bear with Sammy Sanchez, Igor Anton and Mikel Astarloza. Plus they’ve been practising their time-trialling [are you sure about that? – Ed]. Finally, Caja Rural have David De La Fuente as their main man and Utensilnord Named come with Paxti Vila.

It’s hard to pick a winner but I’m pretty sure that someone from OPQS will be on the podium, probably having won the time trial. Euskaltel may well target the prestigious stage three but beyond that it’s really too hard to call. Here at VeloVoices we’ll be keeping an eye on BMC’s Amael Moinard who rode a blinder in support of Cadel Evans at last weekend’s Criterium International.

The Vuelta al Pais Vasco starts on Monday 2nd April and concludes on Saturday 7th. Live action will be shown daily on Eurosport. For other channels check cyclingfans.com.