Funny, cruel, odd, personal … you get it all on Twitter. Each week, we’ll have a rundown of some of our favourite tweets. Here are the tweets for the week ending 25th March 2012.

A shit day of lots of #unluck

It was quite the week of racing – and with hard racing comes hard falls and E3 Harelbeke had some doozies. Let’s start with an x-ray, shall we? Garmin-Barracuda’s David Millar went down during Friday’s E3 and broke his collarbone. So he went to get an x-ray and they found a comb, some iPod earbuds and a couple of those weird labels you used to make when you were a kid …

If that isn’t enough, he also got this …

But compared with the aftermath of 1t4i’s Koen de Kort‘s E3 fall, Millar is just playing at this bandage lark. 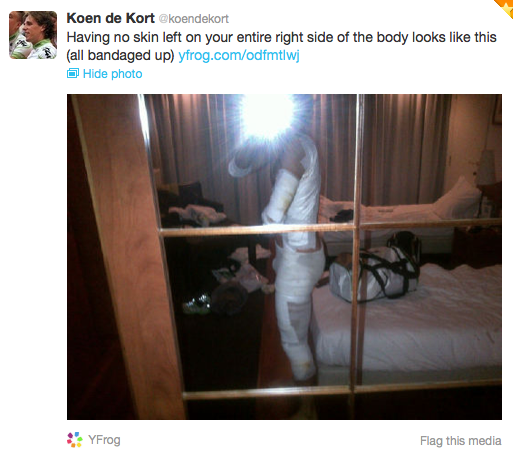 But My Beloved, in his own charming way, told us exactly what Friday was like. We start when he was hopeful and optimistic:

Boy, did that fresh-faced excitement wear off!. As they say, beware the anger of a patient man. I wouldn’t want to be on the wrong side of Spartacus! He’s RAGING!

I think it was the ‘shame on you’ that clinched it for me – you can just hear him say it with indignation in his voice, can’t you?

Then he posts the picture that looked like a horror movie:

I think we can safely say, for TrekJordan, it was a shit day of lot of #unluck too…

Hope you have a speedy recovery, Jordan!

Is it a prize? Or just a dancing pig?

It’s hard to find something to say about the above, but if you can think of a caption, bung it into the comments section of this post! Best caption gets a selection of candy from Kitty’s Candy Cart. [Should that be Kandy Kart? – Ed]

This animal picture, however, is my favourite of the week. Here is Cadel Evans, back home after winning the Criterium International this weekend and having dinner with his young son and a very familiar lion … Are more of those going to be lined up on the Evans dinner table in July, we wonder? I’m not betting against him, folks …

Don’t you love the way Robbie McEwen cuts to the chase? A guy laments riding in the rain and gets no sympathy what.so.ever.

Tweets isn’t tweets without Greg Henderson making a few salient points. I must say, however, I am a bit worried about Adam Hansen – he’s not tweeted for weeks! Come back, Adam!!! My week of ‘what would Greg Henderson do?’ was pretty successful. By successful, I mean I wasn’t punched in the face by telling a few home truths. When asked my opinion, I said it straight out, no flim-flam, just like GH1 … and then I quickly moved away from the person… this week, looks like I will need to sweat alone …

Random tweets to amuse and disturb

I usually have about 20 or so tweets picked out each week, but always find that, if they don’t go with the themes, I have to let some of the best go. But this week, well, I just didn’t have the heart so here are some that I thought needed the oxygen of publicity.

Sky’s Bernie Eisel is the ladies’ favourite on Twitter … a lot of perving over the big Austrian. Well, one of my favourite tweet-peeps, KissMyPanache, has had enough of it …

I find this particular tweet from BMC’s Taylor Phinney very disturbing. Unless the deceased was a cycling fan.

I really love Tom Boonen – not as much as I love Fabian, but I do love him. That said, I thought nyvelocity was onto something with this tweet after E3.

But I’m going to leave it to VeloVoices’ own Sheree to close the column. She was live tweeting the Volta all last week and, as anyone who has ever relied on Eurosport knows from bitter experience, things didn’t go to schedule.

But like the trouper she is, the show must go on! Sport must be tweeted! Any sport! All sport! The woman is a pro, no doubt about it, as she can even make a 10,000-metre speed skating race sound absolutely thrilling!

9 thoughts on “Tweets of the week: Pigs, pins and #unluck”