After a storming E3 Harelbeke started the week of Belgian Classics off with a bang and a Boonen, Sunday’s Gent-Wevelgem sees many of the same riders taking to the road to put more climbs and kilometres into their legs in preparation for the Ronde van Vlaanderen (Tour of Flanders) on April 1st. Defending champion Tom Boonen is in incredible form and will be looking to go 2-0 over Fabian Cancellara in this weekend’s racing.

This 235km one-day classic, traditionally ridden on the Sunday before Ronde, is the most sprinter-friendly of the Belgian classics due to its flat finish – and certainly last year’s top five and a glance at the list of winners bears this out, although the 11 climbs doesn’t necessarily make a bunch sprint inevitable.

The most recent winners of the race are: 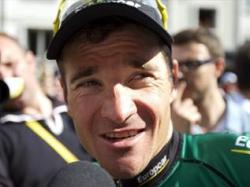 Thomas Voeckler animated the race by leading a breakaway for most of the day, shedding riders out of his group one by one until he came to the second climb of the Kemmelberg alone. With the peloton only 40 seconds back, Peter Sagan of Liquigas made his move, which split the group and ensured that Voeckler was reeled back in by the peloton. Sagan continued to attack until he was able to get away in a little breakaway of his own, with teammate Maciej Bodnar, Ian Stannard from Sky and Sylvain Chavanel from Quick Step. Omega Pharma-Lotto’s Philippe Gilbert tried to bridge across but by this time HTC-Highroad was starting to stoke up their sprint train in order to get the peloton back together for a bunch sprint that would launch Mark Cavendish.

Cavendish, however, crashed, giving the breakaway group extra energy for the fight. However, once the peloton saw the four riders up the road in front of them, it was, as Paul Sherwen would say, “like a strawberry to a donkey” and the fantastic four were reeled in. It looked like Stannard, not Cavendish, would be across the finish line first, after taking another flyer off the front and passing under the flamme rouge alone, but his legs gave out before his hope, and the peloton swallowed him up and spat him out the back. With 150 metres to go, Tyler Farrar of Garmin-Cervelo opened up the sprint, only to see Tom Boonen and Daniele Bennati sweep past him to snatch first and second.

This year’s parcours has been increased by 30km from last year and runs along the coast into France before heading east to the finish in Wevelgem. It features 11 climbs, including the Casselberg twice, about halfway through the race, and the Kemmelberg twice nearer the end of the race. The final climb of the day is the Monteberg, a final chance for the non-sprinters to attack and get away, with just a little under 33km to race on the flat before the finish. With many of the E3 riders participating this year, it will be interesting to see the energy levels for attacks by the big men of the race who would not want the finish to end in a sprint. 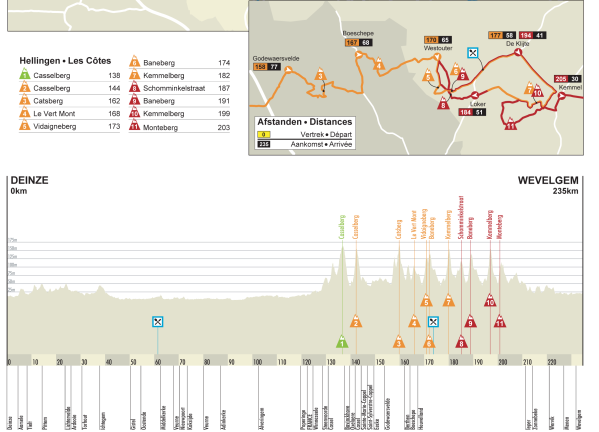 Tom Boonen, hot from Friday’s victory, pins the number 1 onto his back and is supported by a strong Omega Pharma-Quick Step team, including Gert Steegmans and Stijn Vandenbergh. Boonen’s Classics rival Fabian Cancellara is back after his disastrous Friday, riding with his team’s sprint leader Daniele Bennati. Neither Boonen nor Cancellara will want a sprint finish so they might try something to distance themselves from the sprint trains. BMC’s Philippe Gilbert (still in the lineup as of posting although there’s speculation he’ll skip the race due to dental problems) and Thor Hushovd will be watching these two and making sure they’re with them if they do go. 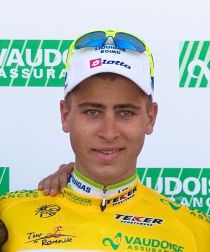 Kitty's money is on Sagan for the win. Image courtesy of Wikipedia

As for the sprinters, Mark Cavendish is targeting this race so Sky will try to keep control, with Bernie Eisel and Edvald Boassen Hagen riding for the Manx Missile. Andre Greipel (Lotto-Belisol), Oscar Freire (Katusha), Tyler Farrar (Garmin-Barracuda), Marcel Kittel (1t4i) and Lampre’s Alessandro Petacchi will be trying to derail the Sky train.

However, my wild prediction of the week is Liquigas’ Peter Sagan. He showed last year that he could get over the climbs quite handily and he was active in E3 on Friday so, for me, I think first over the line tomorrow will be SuperSagan.

One thought on “Gent-Wevelgem preview”