40 years young, RadioShack-Nissan’s Chris Horner assumed the overall lead today (Saturday) after the first of back-to-back mountain stages as Tirreno-Adriatico reaches the business end of proceedings. He took over the maglia azzurra from Matt Goss, who had led since his GreenEDGE team had swept all before them in the opening team time trial. In between, the Sky pair of Mark Cavendish and Edvald Boasson Hagen had won both sprint stages. Tomorrow’s queen stage is sure to shake up the GC further ahead of Tuesday’s concluding individual time trial.

Matt Goss had the best possible start to his preparation for his defence of Milan-San Remo as GreenEDGE dominated the team time trial to put him into the leader’s blue jersey.

The 16.9km course was essentially a flat, straight blast up the coast road with technical sections at either end, making it a decent test of power, aero efficiency and bike-handling. The early benchmark was set by Garmin-Barracuda, who included David Millar and Alex Rasmussen, first and second in the closing individual time trial at last year’s Giro. They recorded a time of 18:58, eventually the third-fastest overall.

RadioShack-Nissan, powered by Fabian Cancellara, also stopped the clock at 18:58, a fraction quicker than Garmin. And then GreenEDGE, powered by two-time Australian time trial champion Cameron Meyer, tore up the timesheet as they powered home – with Goss in front – in 18:41, the fastest by 17 seconds at an impressive average of 54.3kph.

Last on the road was BMC, the team of defending champion Cadel Evans. But theirs was anything but a champion’s performance. They tailed men off quickly, including a lacklustre Philippe Gilbert, and finished in a ragged, disappointing 19:39 – 58 seconds off the pace and only 17th out of the 22 teams.

Evans’ title defence was effectively over before it had begun. After the stage the Australian was disappointed but doggedly optimistic, as he said on his own website:

Our opening TTT was obviously below our expectations and capabilities. A couple of our guys not firing for various reasons, unfortunate wind conditions – a disappointing start – but that’s racing, and plenty more racing to come yet.

Mindful of the lengthy 230km parcours, no one seemed in any rush on a flat stage which was completed at a leisurely 35kph. At least, there was no hurry until the final kilometre, when the familiar rainbow-clad figure of Mark Cavendish bolted clear to claim his fourth win of the season.

A two-man break of Stefano Pirazzi (Colnago-CSF Inox) and Diego Caccia (Farnese Vini-Serre Italia) injected a modicum of life into the day’s racing. They led by over seven minutes at one point as GreenEDGE put the Canadian-liveried Svein Tuft on the front single-handed for 200km. The gap was still hovering around 2:45 with 40km left when Tuft suddenly cranked the pace, swallowing up the deficit faster than a powered-up Pac-Man. With 30km left, it was gruppo compatto as Pirazzi and Caccia disappeared into the maw of the bunch, to reappear almost immediately trailing out of the back. Such is the lot of the breakaway artist.

GreenEDGE continued to set a decent pace on the front until other teams stirred to show an interest in the final 10km and bring back a couple of short-lived two-man breaks. The final 2km unfolded like so many sprints we have seen before. Garmin-Barracuda seized control, setting up a textbook four-man train for the final kilometre. With Tyler Farrar – the stage winner here last year – in tow, Robbie Hunter led out. However, hanging off Farrar’s shoulder was the world champion’s own chauffeur, Edvald Boasson Hagen. As Hunter dropped off Farrar just before the 200m board, Boasson Hagen deposited Cavendish onto the American’s wheel. Farrar could only glance over despairingly as Cavendish whipped past him in the final 100m with devastating ease. Katusha veteran Oscar Freire also powered by to take second.

Cavendish pronounced himself happy with a confidence-boosting win ahead of Milan-San Remo, and thanked his team and Boasson Hagen:

Riding into the wind, Boasson Hagen was fantastic. With him it’s like playing on PlayStation: he tells me left, right, and I just go faster, faster, faster and faster.

The only previous occasion on which Cavendish has won a stage at Tirreno-Adriatico was in 2009 – the year he went on to win Milan-San Remo. Time to put some money down, methinks.

Colnago’s Filippo Savini spent nearly 150km in a solo breakaway, only to be swallowed up and spat out mercilessly. Meanwhile Sky sheltered in the bunch, only to pop up at the end to launch Edvald Boasson Hagen to clinch the stage with a convincing sprint, their second in consecutive days.

Savini at one stage held an 11-minute lead before he tired in the face of persistent head and crosswinds and was caught with 28km remaining. In the closing stages no one team was able to assert control. Only in the final 2km did Sky start to move Boasson Hagen forward. On the cobbled finish, the Norwegian opened up coming off the final bend with around 300m to go and easily held off Andre Greipel (Lotto-Belisol) by three-quarters of a length. Peter Sagan (Liquigas-Cannondale) was third, with Tyler Farrar fourth.

Boasson Hagen had only learned late on that teammate Mark Cavendish would not contest the sprint as planned:

I found out at about 6km to go that Mark didn’t feel so good. The whole team did a good job to keep me up towards the front.  It was a long sprint but I went and I knew I had to go for it. I know that I’m pretty good at long sprints and I’ve done it before.

The ten-second win bonus moved Boasson Hagen up to sixth overall, 13 seconds behind race leader Matt Goss. RadioShack’s Chris Horner was the best placed of the serious GC contenders, 20 seconds down in eighth.

Although snow rendered the day’s big climb of the Passo Lanciano unsafe – to the annoyance of GC contenders such as Liquigas’ Vincenzo Nibali – the peloton still had to negotiate a marathon 252km culminating in a daunting final climb in Chieti where a Liquigas one-two punch provided the knockout blow from which Peter Sagan left his rivals down for the count.

Without the Lanciano pass to soften up the legs this stage was all about the final 10km, which featured a longer, shallower climb before the climactic short, sharp ascent in Chieti. Katusha’s Pavel Brutt was the last survivor of the day’s breakaway, with the Russian being swept up as the peloton approached the penultimate climb of the day, a 5km, 5% gradient drag peaking just 5km from the finish. Dmitriy Muravyev (Astana) and Mikel Landa (Euskaltel-Euskadi) launched unsuccessful solo attacks on the climb as Liquigas quickly brought both to heel.

Defending champion Cadel Evans (BMC) showed briefly in the early stages of the final 2.2km, 12.2% climb – which features ramps of up to 19% in its first half – but he soon faded. Vacansoleil’s Johnny ‘Bouquet of Barbed Wire’ Hoogerland made the first big attack at 1.5km, and although he was soon caught he succeeded in decimating the lead group to just five: Liquigas’ Sagan and Nibali, Horner, Danilo Di Luca (Acqua & Sapone) and Roman Kreuziger (Astana). Sagan accelerated at the mid-point of the climb just as the gradient started to flatten, prompting Kreuziger to go over the top of him, which in turn brought an attack from Nibali with around 500m to go. But as the Sicilian faded, Sagan put in a second effort in the final 200m to power his way to a comfortable victory. Kreuziger beat Nibali to second spot.

Horner crossed the line fifth, behind Di Luca, to take the race lead from Matt Goss, who finished well down as the peloton shattered on the final climb. Kreuziger is his nearest threat at seven seconds.

This is the American’s first race since crashing out of last year’s Tour de France. He has just recovered from a lung embolism, having spent the winter on blood thinners:

It’s been eight months [since my last race]. I was still on blood thinners in January, for six months. I’m sure there were many people that doubted my fitness, especially from the embolism. This shows it has not changed my form.

Tomorrow sees by far the toughest climbing day of this year’s edition, and will definitively shape to the top of the overall standings. The first 150km is tricky rather than selective, although the contenders will need to be watchful for potential crosswinds off the Adriatic in the first half of the stage. However, in the final 35km the peloton must tackle first the 1,227m Piano Roseto, and then a summit finish on top of Prati di Tivo at 1,450m. This last climb is a 14.5km ascent averaging 7% – long and tough enough to give the best climbers a chance to put serious time into their rivals. Chris Horner will need to watch out for the likes of Vincenzo Nibali, Joaquim Rodriguez (Katusha), Michele Scarponi (Lampre-ISD) and the Acqua & Sapone pair of Danilo Di Luca and Stefano Garzelli. 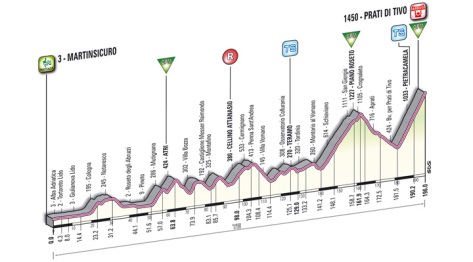 The penultimate stage is a rolling affair which features six 16.2km laps around Offida. The undulating profile, coming straight after the two mountain stages, offers a significant opportunity for a break to stay away to the end. The overall contenders may settle for a relatively easy ride before the final time trial. Realistically, anyone who starts the 9.3km course hoping to overhaul the maglia azzurra will need to be within 20 seconds of the lead.