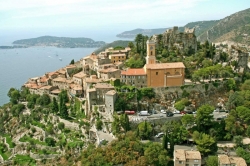 Col d’Eze looks down on Nice and Monaco from a height of just over 500 metres. It’s close to La Turbie and overlooks the walled village of Eze. It’s a popular destination for both cyclists and ramblers and will be a hive of activity tomorrow (Sunday) as it hosts the finale of Paris-Nice. Which, with a nod to its past, has this year reintroduced the final 9.6km time trial up its slopes.

The Col figures highly in my own cycling history as it was the first real hill I ever climbed and I did so during Paris-Nice 2008. Alex Vinokourov, who’s an honouree member of my cycling club, had provided us with ‘Astana au Tour’ t-shirts. This you’ll recall was the year Astana were not invited to take part in either Paris-Nice or the Tour de France, all part of the ongoing power struggle between UCI and ASO. Indeed, we all feared that the race would be cancelled. It wasn’t, but the defending champion, Alberto Contador, wouldn’t be riding.

We first rode to the Sunday pointage, which is always at Super Cannes during Paris-Nice, getting lost as usual in its myriad of streets before eventually locating, by chance, the rendezvous point in rue l’Observatoire. Home for a quick change into neutral riding jerseys, no point in alienating our own sponsor, which at the time was Bouygues Telecom.

We went first to the sign-on where our mass of t-shirts caused quite a stir. The peloton’s departure was delayed firstly by a bit of a rock-fall in La Turbie, necessitating a quick shortening of the route and secondly by a rider protest – not over the exclusion of Astana. The second two-minute delay was initiated by the riders who, as Philippe Gilbert (FDJ) explained, wanted to highlight the unnecessarily insensitive treatment of Kevin Van Impe (Quick Step) by drug testers, who had arrived while he was making the funeral arrangements for his recently deceased infant, and had refused to leave without taking a sample. 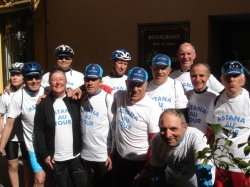 After the peloton departed, we me met up at Alex’s restaurant in Nice to fortify ourselves with pizza and pissaladière [a local onion pizza-like delicacy, not the falling-down beverage it sounds like – Ed] before mounting the Col and our mini-demonstration. My club-mates, clearly fearing I might be unable to ascend the obstacle, abandoned me to the care of a younger couple, easily half my age. She was Russian and he was an ex-professional footballer who promised not to leave me behind once I’d confessed I wasn’t very quick going uphill. This was masterful British understatement at its finest.

Having left the restaurant, we seemed to go round in circles before finally finding the start of the climb up Col d’Eze, the Grande Corniche. The first bit’s steep and fairly inauspicious, not that I gave much thought to my surroundings. It was a warm afternoon and this was long before I’d mastered the art of drinking on the bike.

The other two shot up the steep incline – the first few kilometres is the worst. The professionals regard this climb as an uphill sprint, but I was travelling in slow motion. After 3km the road thankfully flattens. I stopped for a drink before climbing back on my trusty stead, my Orbea Diva complete with a triple. Needless to say I had been in my super-granny gear.

I soon overhauled the ex-footballer, who was in real difficulties. I promised I’d locate and send his wife back to check on him. I pedalled off. I found his wife at the end of the 2km flattish stretch and sent her back to the rescue, I pedalled on alone. After what seemed like a really long distance but is in fact only just over 5.5km, the road from Villefranche sur Mer feeds in and the gradient rises again. A kilometre or so later I passed the road leading down to the fairy tale like Eze village.

Once beyond this point, the view down to the coast opens up and rewards you with the most magnificent sight of the bay of Villefranche, littered with luxury yachts and the Cap Ferrat peninsula, covered in prime real-estate. When you cycle as slowly as I do, you have plenty of time to appreciate the sights. Not something the professional peloton can indulge in.

As I wended my way to the summit of the climb the last few kilometres were helpfully marked. In addition, a number of my club-mates had driven up the Col to watch the action and were cheering me on from the sidelines which added some real vigour to my pedalling. The final few hundred metres are flat and the white finish line looked as if it finished in no-man’s land, but no matter. I’d done it.

But I’d done it alone and no, I hadn’t beaten Sean Kelly’s record of 19:45. Where were my teammates who were all much better cyclists than I? A quick call to M Le President – yes, the French love titles – solved the mystery. They’d been delayed by a number of punctures and were at one of the lower junctions unable to travel further as the road was now closed. So it was going to be a one-woman protest.

As ASO’s Christian Prudhomme was driven past in his Skoda car he glanced over in my direction and noted the t-shirt but his face remained impassive. I’m told I featured on the television coverage of the race, a brief flicker and a few nano-seconds of fame. Thereafter I sat on the wall, awaiting the arrival of the peloton who were going to be climbing the Col twice from the Moyenne Corniche. 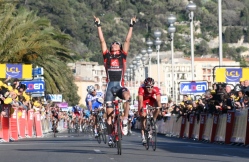 Clement Lhotellerie (Skil-Shimano) [whatever happened to him? – Ed] was first to the summit, on both occasions, helping to preserve his King of the Mountains jersey, moving at what seemed to be the speed of light, pursued by a small group of riders which was to provide the stage winner, Luis Leon Sanchez (Caisse d’Epargne). Davide Rebellin (Gerolsteiner) won the overall having seized the leader’s yellow jersey from Robert Gesink (Rabobank) on the penultimate stage into Cannes.

After the peloton departed, the road was still closed to traffic and I was able to channel my inner Sammy Sanchez on the steep descent back until I was stopped by a policeman. Not for speeding, just to warn me of the traffic backed up on the road after the junction. Weaving in and out of said traffic rather slowed my trajectory. I arrived back in Nice after pretty much everyone had departed and the teams of contractors were already taking down all the race paraphernalia.

I stopped for a well-earned drink and rode home. Job done and moreover, not only had I ascended my first biggish climb but I’d ridden over 100km, 122km to be precise – another first!

Link: Check out the parcours with Cycling the Alps website