Colombian Jose Serpa (Androni Giocattoli) won his second Tour de Langkawi, having established a decisive lead on the queen stage summit finish in the Genting Highlands. But the real star of the race was Farnese Vini’s Andrea Guardini, who followed up his five-win appearance in 2011 with a further six in the 2012 edition as he monopolised the bunch sprints.

David Zabriskie (Garmin-Barracuda) had won the opening time trial before Guardini bossed the bunch sprints on the next three days. Serpa then won a hilly fifth stage before a fine team effort set him up for victory at the Genting summit, which moved him into the overall lead, 30 seconds ahead of teammate Jose Rujano. (You can click here for summaries of stages 1-5 and the queen stage 6.)

The race’s longest stage came the day after its big mountain test, creating the perfect scenario for a successful breakaway. With both Guardini’s Farnese Vini and Serpa’s Androni teams happy to let the escape go, it was left to another Italian rider on an Italian team – Colnago-CSF Inox’s Marco Canola – to claim his first win as a neo-pro as the fastest man at the finish in Kuantan.

Having lost 18 minutes on the climb to Genting, 2003 winner Tom Danielson (Garmin) withdrew from the race overnight. He had been suffering with arm and leg injuries sustained in a crash on stage three.

Initially the peloton was in no mood to let a break get away, with every speculative move snuffed out as 51 km were covered in the first hour. Eventually a 13-man group slipped four minutes up the road, with the highest-placed rider being Joseph Cooper (New Zealand), 17th at 6:14. Astana’s Valentin Iglinskiy was also in the escape, and he accumulated enough points at the intermediate sprints to move himself ahead of Guardini in the points competition.

Towards the end, the members of the breakaway started to focus on individual glory rather than collective cooperation. After a series of feints and accelerations, Rusvelo’s Serguy Klimov initiated a decisive attack with 3km to go, taking Canola and three others with him. The Italian mistimed his sprint and started too early, but only Joon Yong Seo (Seoul Cycling) was able to get within a bike length as he held everyone off to the line.

The 23-year old Canola comes from a good sporting blood-line – his cousin Gelindo Bordin won the 1988 Olympic marathon. He was understandably delighted to have recorded his first win as a pro so quickly:

It is difficult to describe how happy I am. At the Tour of Calabria in Italy I did my first race as a professional before coming here. This is only my second race as a pro, and I have already managed to win a stage.

Predictably Guardini led home the peloton 1½ minutes later to take 14th, but the general classification remained largely unchanged, with Cooper’s breakaway exploits producing the only change to the top ten as he jumped to tenth. 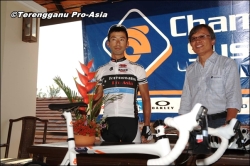 Four riders escaped after 15km, including VeloVoices’ rider Shinichi Fukushima (Terengganu). Their number briefly swelled to six before reducing to five. In no mood for a hard chase on an increasingly wet day, the peloton never allowed them more than 1½ minutes’ leeway and they were easily hauled in before the finish, where Guardini had little difficulty in holding off local sprinter Salleh Harrif (Terengganu) and Jacobe Keough (UnitedHealthcare).

In racing terms, Fukushima had little to show for yet another day in the breakaway other than winning the final intermediate sprint. On a personal note, however, he had rather more to celebrate with the birth of his third child, a daughter, that morning. Congratulations!

On another rainy day on Malaysia’s east coast, Andrea Guardini again demonstrated he’s no fair-weather sprinter with another routine victory.

A historic trading port, Kuala Terengganu is home to several members of the Terengganu team, including stage eight runner-up Salleh Harrif, who unsurprisingly darted to the front of the peloton to claim the first intermediate sprint. Not until 88km did a group of four finally manage to successfully get away, including former Tour de France King of the Mountains Anthony Charteau (Europcar). However, on yet another fast day – the first two hours were completed at an average of 51kph – the break was never allowed more than 2½ minutes and was easily reeled in as Farnese Vini received a helping hand from the Drapac team.

Yet again Guardini positioned himself perfectly in the final kilometre and won by his customary bike length after overhauling Garmin’s Raymond Kreder, who had made the first jump. Europcar’s Matteo Pelucchi was the day’s second-placed man, with Kreder third. In addition to recording his tenth career Langkawi stage – a new record – Guardini reclaimed the blue point leader’s jersey from Valentin Iglinskiy. After the stage he said:

The Tour de Langkawi is very special to me as it was here where I took the first wins in my professional career. Because of that, it is great to get the record of ten stage wins. I thank my team for the perfect lead-out for the stage today.

There were no changes at the top of the GC, despite a crash which delayed half the peloton in the final 3km. All riders in the bunch before the split were given the same time.

Guardini confirmed his total domination of the bunch sprints by claiming his sixth stage to extend his overall record in Malaysia to 11 wins. Jose Serpa confirmed his overall victory. And the day’s racing was animated once again by our friend Shinichi Fukushima and a valedictory lap of honour by Alexandre Vinokourov.

An initial two rider-break swelled to four – including the 40-year old Japanese rider Fukushima, riding for the local Terengganu team, and Joon Yong Seo (Seoul Cycling) – with a 4½-minute lead over the peloton. This set up the excitement of the cat-and-mouse hunt in the climactic six laps around Kuala Terengganu as the bunch, led by Guardini’s Farnese Vini team and the Europcar squad of sprinter Matteo Pelucchi, gave chase.

Seo and Fukushima were the last two survivors – with the latter receiving warm applause from the crowd as he claimed the second sprint prime for the local squad. However he too would fall away, with Seo being joined for the last two laps by Vinokourov, his Astana teammate Dmitriy Gruzdev and New Zealand’s Roman Van Uden. In his final season Vinokourov, ever the showman, pulled hard on the front of the break to keep them out of the clutches of the peloton and then finally went it alone in a glorious but always futile bid for victory.

Vino was not pegged back until the final 2.5km as Europcar tried to set up the lead-out for Pelucchi. However, he was swamped at the finish as the other principal sprinters swept past him, led by the unstoppable Guardini and followed home by UnitedHealthcare’s Jacobe Keough, who had to settle for second yet again.

Androni’s Jose Serpa finished safely in the pack to confirm his status as the overall winner, tying Paolo Lanfranchi as the only two-time winners of the race. Capping off a dominant showing by the two Italian teams, Guardini and Serpa also won the points and mountains classifications respectively, while Androni Giocattoli picked up the team prize, having fielded three of the top five finishers.

With seven of the race’s ten stages being flat in nature, the race was always going to be decided on the two mountain stages – and in particular stage six to Genting Highlands. Having won at Genting on each of his previous three attempts, Serpa – backed by an Androni team packed full of climbers and including previous winners Jose Rujano and Jonathan Monsalve – was always going to be the favourite for the stage. The only question was whether Rujano, the superior time-trialist, would be able to finish close enough to him to take the yellow jersey. But Rujano burned himself out with his repeated attacks on the final climb as part of the team plan to wear down Serpa’s rivals. He ended up having to settle for second overall, 30 seconds behind.

It was a fine show of strength from a squad who will animate the mountain stages at the Giro d’Italia as a wild-card inclusion. Rujano will be the team’s featured rider there. A former King of the Mountains winner in 2005 (when he finished third overall), last year he was a major protagonist on the big climbs, winning on the Grossglockner and inheriting the Mount Etna stage following Alberto Contador’s ban. He was classified sixth overall.

Farnese Vini, another Italian team who will feature as a Giro wild-card, will focus on the flat stages. The 22-year old Guardini will be given his Grand Tour debut here, where he will be given the opportunity to test himself against the sport’s elite sprinters. Albeit against a mediocre field here, he won each of the six bunch sprints with a level of aplomb and comfort which suggests he will certainly not be out of place in such illustrious company.

Other sprinters who regularly had the best view of Guardini’s rear wheel included UnitedHealthcare’s Jacobe Keough, Garmin-Barracuda’s Raymond Kreder (one of two brothers, as previously featured by Sheree), Astana’s Valentin Iglinskiy and Terengganu’s Salleh Harrif. But in truth none of these seriously came close to challenging Guardini’s pre-eminence.

Finally, a note for two riders who injected a little soul into the race. Alexandre Vinokourov animated the closing kilometres of today’s final stage in typically swashbuckling style. He may still be struggling after his recovery from the broken femur he suffered at last year’s Tour de France, but his attacking nature remains undiminished. And VeloVoices’ own adopted rider, Shinichi Fukushima, somehow seemed to find his way into virtually every breakaway and also celebrated the birth of his third child during the race. Vino finished 64th and Fukushima 100th of the 177 finishers, but those numbers do not begin to tell the full story of their contribution to the race.

As for the race itself, the Tour continues to be balanced heavily in favour of the sprinters – perhaps too much so. With only the opening time trial and the two climbing days to break up the routine of flat stages, it does not make for the most attractive TV package for international broadcasters – particularly when you take into account the eight-hour time difference and the early starts to avoid the worst of the day’s heat, which meant most stages were finished by 0530 GMT/0630 CET. Certainly there seems to be little need for the decisive queen stage to be followed by four flat runs to the finish, particularly when we were denied live coverage of all but the final 2km of the Genting climb. It’s still a fascinating race in a fantastic setting, but I can’t help but feel this would be better off as a tightly packaged six or seven-day race.