Androni Giocattoli’s Jose Serpa beat Victor Nino at the end of the Tour de Langkawi‘s queen stage to claim victory for the second consecutive day and also the yellow jersey on a punishing climb into the Genting Highlands. It was the fourth time the Colombian climber has contested the stage to Genting – and the fourth time he has won it. The 2009 overall winner now holds a commanding lead in the general classification. With four flat stages left to complete, he is set to become only the second two-time winner of the race when it finishes on Sunday.

Today’s 108km stage contained just one fourth-category speed bump – at 58m, even a cat. 4 classification was stretching it – between the peloton and the climactic ascent to the rather more impressive 1,679m summit at a rainy Genting. The race’s sole hors categorie climb is as tough as they come outside of the Grand Tours, with two vertiginous sections containing several steep switch-backs sandwiching a short downhill section.

Before then, of course, there was the daily breakaway to chase down. Seven men escaped early on, establishing a five-minute lead as they passed the Batu Caves near the mid-point of the stage. Gradually both the advantage and the number of the leaders was whittled down as they approached the foothills of the final ascent, with only four men –  Loh Sea Keong (OCBC Singapore), Sonny Colbrelli (Colnago-CSF Inox), Assan Bazayev (Astana) and James Williamson (New Zealand) – still out in front as the climb proper began, with the peloton – led by the Drapac team of overall leader Darren Lapthorne – just over three minutes in arrears.

However, Lapthorne was soon in trouble, while up front natural selection reduced the lead group to just Bazayev and Williamson. This was the cue for Androni’s Jose Rujano (the 2010 overall winner) to put the hammer down, creating an elite chase group of four with teammates Serpa and Carlos Ochoa, and Azad University Cross’ Victor Nino.

The chase group became the lead group at 15km, as Bazayev became the last member of the breakaway to be swallowed up. With Ochoa yo-yoing off the back, Rujano put in a series of attacks to try to shake off Nino, presumably part of a coordinated team plan with the dual objective of a stage win for Serpa and the yellow jersey for himself. However, Nino clung on capably, and instead it was Ochoa who was finally dislodged and rapidly fell backwards through the pack. He would eventually finish 19th, 5:17 down.

Behind the lead four another Androni rider, Jackson Rodriguez, and overall third-place man Alexandr Dyachenko (Astana) were in no-man’s land, 1½ minutes off the front but around 30 seconds ahead of the peloton. Behind them, both Lapthorne and second-placed Tom Danielson (Garmin-Barracuda) were now struggling terribly and losing time with every pedal-stroke. 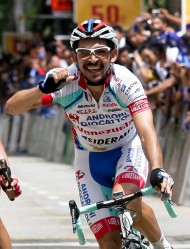 With Rujano running out of punches, Serpa took it on himself to keep the pressure on. He attacked with 6km to go and briefly went clear. However Nino slowly regained his wheel. Rujano did the same briefly, but quickly found himself falling away for good as he paid for his earlier exertions. This left Serpa and Nino to duke it out one-on-one to the finish.

The wily Serpa manoeuvred Nino into the front position, spending the closing 2km pretending to be his fellow Colombian’s shadow as he sat tight on his wheel. Nino was left in the unenviable position of providing the world’s longest lead-out. As the pair rounded the final bend with 350m to go for the testing uphill drive to the finish, Serpa lined up his rival, eased around him with 150m remaining, and easily cruised past as Nino had nothing left to give.

An exhausted Rujano arrived 46 seconds later, confirming Serpa as the new race leader but good enough to move him into second overall. Dyachenko finished alone at 2:32, followed by Rodriguez and Stefano Locatelli (Colnago) a further 24 seconds back as the peloton dribbled over the line in ones and twos, with RST Racing’s Chin Lung Huang the 123rd and last finisher, a mere 49:07 behind Serpa.

Former leader Lapthorne had lost 15 minutes by the time he finally finished, while Danielson lost 18. They slipped down the GC to 38th and 53rd respectively. The 40-year old legs of VeloVoices’ adoptee Shinichi Fukushima (Terengganu Cycling) finished ahead of both of them, rolling in 42nd at 11:57. He is now 71st overall, 26:14 behind Serpa.

With no more major climbs between now and the end of the final stage in Kuala Terrenganu on Sunday, Serpa’s 30-second lead over teammate Rujano should guarantee him overall victory, barring any major mishaps. With his wins both here and in yesterday’s fifth stage, he is undoubtedly a deserved champion. And Androni Giocattoli, who have the first, second and fifth-placed riders overall – and five of the top 16 – have certainly been the strongest team.

One final comment on the local media coverage of the race. TV1 (the main Malaysian state-owned broadcaster) was only able bring viewers moto pictures of the last 2km, supplemented by an at-the-finish presenter relaying race updates to camera (in Malay, naturally) before then. (The race organisers have, however, provided excellent updates via Twitter.) I’m not sure whether international broadcasters such as Eurosport decided not to include the Tour de Langkawi on their schedules because of the lack of coverage, or whether the paltry feed was a result of helicopter and satellite feeds not being economically viable. I suspect the latter. But for the queen stage of the biggest cycling event in Asia outside of the new WorldTour races in China to be effectively restricted to five minutes – even for local viewers – is a real shame.