Here at VeloVoices I’ve been seriously seeking siblings. It’s quite amazing how many sets of brothers are riding in the professional peloton, often on the same team. Actually, it’s not. Read any racer’s biography and he’ll often cite an older brother who raced as his inspiration to take up cycling. That older brother may or may not have gone on to race professionally but either way he’ll have sent his younger sibling along the competitive path.

Scanning the start list of Le Tour de Langkawi I thought I’d hit pay dirt when I noticed two sets of brothers, one of whom were related to last year’s runner-up. So allow me to present firstly the Italian Locatelli fratellli and then the Colombian hermanos Nino Corredor.

The Locatellis – ‘brothers’ in name only 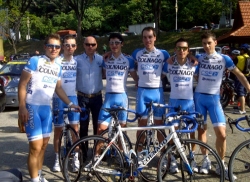 The Locatelli boys are both 22 years old. Twins! No, they have their birthdays nine months apart. I was just starting to sympathize with their poor mother when I noticed they bore absolutely no resemblance to one another and had been born in different towns though in a similar part  of the country – not impossible. After all, I look nothing like either of my two sisters, you can only see the family resemblance when all three are united.

It appears that I’d been led up the garden path. Stefano and Paolo Locatelli are united only in having the same surname and riding for the same team, Colnago CSF-Inox. Though I should add that they’ve both earned impressive palmares as juniors.

Paolo, who’s in his second year as a professional rider, was the national pursuit champion back in 2007, following it up with a third place at the World Championships. He’s also won the Trittico del Veneto and a stage in the Baby Giro. Stefano, a neo-pro, won the GP Palio del Recioto. I wish the boys well in the professional cycling careers. 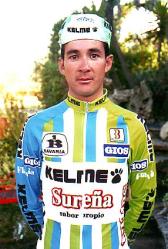 Libardo in his Kelme days (image courtesy of Cycling Archives)

Next up riding for the Iranian continental team Azad University are the Colombian brothers Victor and Miguel Angel Nino Corredor [also spelt ‘Corridor’, depending on which website you read – Ed], younger brothers of Libardo Nino Corredor. Or are they? There appears to be some confusion in the archives. Victor is acknowledged to be Libardo’s brother but the elder Miguel Angel is often referred to as Libardo. So are there really three brothers, or are there two – one of whom’s been less than honest about his advancing years?

Turning first to Libardo, the eldest, who retired last year after his second place overall (at the age of 42) in the Tour de Langkawi. He had turned professional with Kelme in 1994 and enjoyed a successful career with numerous road and time trial victories plus two national championships. However, he lost his Pan-American games silver medal after a positive test and spent a while on the naughty step. He resumed his career and winning ways racing for teams back in Colombia, before returning to race for Malaysia’s Letua Cycling team in 2011, where he also finished an impressive fourth overall on the UCI Asian Tour. [I’m surprised some ProTeam outfit didn’t snap him up for a snip for his points – Ed.]

After extensive research, I do believe all three are brothers. Victor (38) and Miguel (41) are also no spring chickens. They’ve both raced successfully back in Colombia, building impressive palmares. While this is Victor’s first excursion away from South America, Miguel Angel raced last year with his older brother at the Letua Cycling Team.

One can only assume that Azad University recruited Miguel and his younger brother Victor for their climbing expertise which it’s hoped they’ll impart to the remaining members of the team. Or maybe the team is anticipating that one of them will replicate older brother Libardo’s success. In any event, the trio appear to be remarkably well-preserved and enjoying their longevity. Indeed, I half expected to find that their father is still racing on the Colombian masters circuit.

How are they doing?

Brothers or not, we’ve been keeping an eye on how the Locatellis and the Ninos are faring in the Tour de Langkawi. After today’s queen stage six, which finished in the Genting Highlands, the general classification is more or less set in concrete, and both sets of riders can be pleased with their contribution.

Meanwhile Stefano Locatelli finished sixth on today’s stage and now lies an impressive sixth on GC. His teammate, and no relation, Paolo Locatelli is in 100th place.