Welcome to our preview of what’s happening in the world of road cycling in February. After last month’s races in Australia (Tour Down Under), Argentina (Tour de San Luis) and France (GP La Marseillaise), the calendar continues primarily in warmer climes, with the European season still slowly rousing itself from its wintry slumber.

This five-day race over rolling French terrain starts today. It traditionally favours the puncheurs, and seven of the last eight editions have been won by either French or Belgian riders.

The Tour of Qatar is a sprinter’s dream, and is of one of two flat races in the Middle East this month.

Tom Boonen has won this race more than anyone else, with three victories between 2006 and 2009, although this year’s defending champion is Rabobank’s Mark Renshaw. It will be intriguing to see how he fares against Sky’s Mark Cavendish, the man he so capably led out while they were teammates at HTC-Highroad.

A series of flat stages is punctuated only by stage two, an 11.3km team time trial, which could be crucial in determining the overall winner. You can find out more on the Tour’s official website here.

The Tour Mediterraneen along the south France coast is one of the most picturesque races on the calendar, but historically has been hotly contested, with legendary names such as Eddy Merckx and Paolo Bettini having won in the past. Last year David Moncoutie claimed victory, and the race usually favours such a puncheur.

This year’s edition was briefly cancelled due to financial problems but has thankfully been reinstated. You can find out more on the Tour’s official website here.

Many of the top riders in the peloton will be racing both the Tour of Oman and the Tour of Qatar. It has only been run twice previously, with Fabian Cancellara and then Robert Gesink having emerged victorious.

The majority of the race’s six stages are geared towards the sprinters, although a testing climb at the end of the penultimate stage should tip the balance in favour of a climber or all-rounder in terms of overall victory.

The Tour du Haut Var is a short and sweet two-day race in France, favouring the puncheurs on the rolling terrain. Previous winners Sylvain Chavanel, Philippe Gilbert, as well as last year’s victor Thomas Voeckler give a good example of the type of rider you can expect to emerge victorious.

The Tour de Langkawi is a ten-day race run in Malaysia, and is the biggest cycling event in Asia. It is one which favours the climbers, with riders such as Tom Danielson and Chris Horner having won in the past. The reigning champion is Androni Giocattoli’s Venezuelan Jonathan Monsalve.

Look out for full previews in advance of each race here on VeloVoices.

A selection of the more notable birthdays in the peloton this month:

Today (1st): Jurgen Van Den Broeck, Lotto-Belisol (29 years old). A talented climber who is yet to really show it in his results. Won a stage at last year’s Criterium du Dauphine, but crashed out of the Tour de France.

2nd: Sandy Casar, FDJ (33). A big favourite amongst the French fans, Casar is a breakaway specialist who has won multiple stages of the Tour de France – and infamously suffered a nasty crash in the 2007 edition after hitting a dog. He got up, and won the stage.

4th: Johan Vansummeren, Garmin (31). The Belgian all-rounder had the greatest moment of his career at last year’s Paris-Roubaix, when he rode away from the rest to win on the velodrome.

5th: Samuel Sanchez, Euskaltel-Euskadi (34). The Olympic champion from Beijing has an impressive list of achievements which includes a second place finish at the 2009 Vuelta. He finished the 2010 Tour de France fourth, and won the mountains classification and a stage at the last edition. 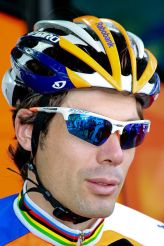 15th: Oscar Freire, Katusha (36). El Gato, who has won three World Championships and eleven Grand Tour stages. He has announced he will retire at the end of the season.

17th: Bernhard Eisel, Sky (31). The Austrian hard-man is mainly known for shepherding Mark Cavendish over the mountains in the Tour de France, and has moved with the world champion to Team Sky for 2012. He’s a very capable classics rider in his own right, and won the 2010 edition of Gent–Wevelgem.

25th: Heinrich Haussler, Garmin (28). The Australian has won stages at the Tour de France and the Vuelta a Espana, and came within inches of taking the 2009 Milan-San Remo, being pipped to the post by Mark Cavendish.

Watch out for the second part of Sheree’s exclusive interview with Bretagne Schuller’s Geoffroy Lequatre on Friday. (You can read part one here.) You will also be able to enter our competition in which you can win a piece of kit from Geoffroy’s G4 clothing range.

After more than 18 months, the Court of Arbitration for Sport is due to deliver its verdict on Alberto Contador‘s doping case next Monday (the 6th). We’ll be summarising CAS’s findings and debating the implications for both Contador and the sport in general right here.

We’ll also bring you the all the key race reviews and analysis, as well as updates on how our favourite riders and teams (see the ‘Riders & Teams’ tab at the top of the page) have fared so far this season towards the end of the month.

And keep an eye out for more interviews and articles in our regular Friday Features slot, not to mention Kathi’s Tweets of the week every Tuesday, book reviews and other topics that tickle our fancy as the month progresses.

Whether serious or light-hearted, VeloVoices is the place to come for all the latest cycling news and views!