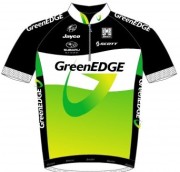 Why I’m following them:

Being married to an Australian, I have adopted the country as my honorary second nation except when it comes to cricket, rugby and other sports in which they are superior to Britain – which, let’s face it, is most of them. So, given their stated aim of having Australian riders form 75% of their roster, I am particularly intrigued by how GreenEDGE’s debut season will unfold.

The team already boasts an interesting mix of youth and experience, with a strong emphasis on sprinting. 39-year old Robbie McEwen will look to end his career on a high, but GreenEDGE’s lead sprinter will undoubtedly be Matthew Goss, a key member of Mark Cavendish’s sprint train at HTC-Highroad and winner of Milan-San Remo last year. New Zealand’s Julian Dean (who joins from Garmin-Cervelo) will most likely be Goss’ main lead-out man.

Entering his 18th season, Stuart O’Grady will be GreenEDGE’s road captain at the big races, bringing one of the peloton’s biggest engines and a wealth of tactical nous to a squad long on talent but short on experience. In particular, look for under-23 time trial world champion Luke Durbridge (who is still 20) and multiple track world champion and 2011 Tour Down Under winner Cameron Meyer (23) to make a big impact.

Meyer will defend his Tour Down Under title (see our race preview here) this week, supported by an all-Australian team comprising McEwen, Durbridge, Gerrans, Goss, O’Grady and Leigh Howard. Goss is probably the team’s best bet for the overall this time around, however.

Watch out for regular updates tracking GreenEDGE’s 2012 season over the coming months.